This is a memorial to my friend Shannon Talton, who died in a car crash less than ten days (April 3, 2018) ago as I write.

We weren't exactly close, though we did talk about a lot of personal stuff and we spent a lot of time together; that's probably pretty close by most standards. We had a lot of life-philosophical differences, though, and... it just never felt all that deep, somehow... but Shannon still represents a major thread in my life, a door into a significant piece of my past that is now permanently closed.

I did always like and admire her, though. She desperately wanted to escape her more-or-less redneck upbringing, and she pretty much did. She went to college, she was politically aware and fact-oriented. She was very involved in a lot of things including the local MakerSpace (which is more than I, the supposed geek, ever did) and the lives of the three kids she had with her husband of 26+ years, and her absence will be a huge gaping hole in their lives even if I'm not really feeling it myself (yet).

She really, really tried, and often succeeded. There aren't enough people who try, and now there's one less.

I met Shannon in, I think, the summer of 1983. I know it was during that horrible year (May '83 - July '84) when Jenny was missing but we all still entertained fantasies of her being safe somewhere, and I'm pretty sure it was the earlier side of that span. I was playing piano in the Bryan Center at Duke, as I sometimes did, and Shannon walked up and introduced herself – I think she was looking for other musical people to collaborate with. I would have been a senior in 82-83 if I'd still been in school; she's a year younger than me, so must have been a junior.

There's a lot I don't remember about our interactions. I don't think we never argued, that I can remember. She was very strong-willed (I don't know if the phrase "wild child" is quite right to describe her during this time, but it's not too far off), and yet respectful of boundaries, and I... never felt any need to be angry with her, nor did I apparently ever do anything that caused her upset (that I ever knew about). My main feeling about her, I think, was a sort of gratitude to have met this quirky vivacious girl who was both interested in my companionship and not afraid of me.[1]

I remember she would frequently take me out places in her car, which I remember as being a bright red convertible. I'm not sure how accurate this memory is... but it fits... so let her be forever memorialized as driving around in a Little Red Corvette on the Edge of Seventeen, because I think she'd like that. I would frequently get headaches from the social overstimulation, but I also liked the company; I was very isolated during that time, my only remaining friend being in Michigan. Occasional doses of overstim were better than constant isolation.

There was a time when a male acquaintance of mine from the Duke Summer School (1982) came to visit, and I somehow got Shannon involved (I think I was looking for social insulation, and called her up), and we all went for a walk at Rhododendron Bluffs and they ended up making out on the rocks in the middle of the stream, and... you know, I was perfectly fine with that (social insulation achieved!), though she apologized afterwards anyway. For some reason I was never exactly attracted to her; I'm not entirely sure why. She did tend to be very flirty (for lack of a better word)... I think that's part of what gave me the headaches. All that focused heteronormativity.

Another time, I was very sick with some kind of super-intense head-cold. Shannon came over, mixed up some sort of obnoxious cocktail, and made me drink it. I don't know if it helped me get better, but I did appreciate the care.

She drove me to meet her friend Amber, who lived with her parents (or just her mom? not sure) in a trailer off Old Chapel Hill Road (in what is now one of those little pocket subdivisions) and was deaf in one ear. Amber was kind of cute and serious and I couldn't think of any basis on which to strike up a friendship, so we only ever met the one time... but I think of Amber every single time we pass that spot, and I always wonder what happened to her. (Maybe S introduced me to other friends as well; I don't remember any of them.)

I told her about Jenny. She had this idea that she had some second-sight-ish ability and might be able to get some idea of Jenny's current condition; I let her do a reading (if that's the right word); she said she envisioned Jenny walking in a field. I didn't take it too seriously, and obviously it turned out to be wrong – unless you take the field as a metaphor for afterlife, which would then be appropriate because any heaven J would have wanted to be in certainly would have included endless fields and woods – but I appreciated the effort.

There was a thing she said once that bothered me, though I'm absolutely sure she didn't mean it maliciously. We were talking about my past failed friendships, I think, and she said something like "it's all a barnyard dance". I'm not quite sure what she actually meant by it, but what it felt like was that she saw those friendships as basically being about sex and that they had failed for sexual-political reasons. This, to me, felt very cynical, and I remember being kind of depressed about it. (In retrospect, I can say quite definitively and with a great deal of supportive evidence that no, they were not about sex and that's not what went wrong.) I think this is another part of why I tended to get headaches around her: our views of interpersonal closeness were just... very different. She casually dismissed something of huge significance to me, probably with some idea that I needed to just let go or relax more or something.

There was one time when I was with her at her parents' house, nobody else was home, we were in her bedroom, and she showed me the spot on one of her boobs where she'd had a tumor removed some time earlier. I didn't touch anything, even just out of curiosity; I had been too strongly trained by Jenny. Shannon didn't remember this incident when I mentioned it in 1991; we decided she must have been slightly drunk. (I think I must have driven over there.)

We recorded a couple of musical things – my favorite was a spontaneous flute improvisation. There was also a song with lyrics, "Hell's Hotel", which MoG once performed in concert, to positive reactions. I keep meaning to try to intermix the two versions somehow. The original studio recording was... creative but awkward; the live version had better energy but wasn't as interesting.

At some point, when I was working at Microglyphics, I recommended hiring Shannon to work there as well. She took over shipping/packing from me, I think, leaving me more time to do testing and support and stuff. It was at the University Drive location, probably early 1984.

I remember walking with Shannon in the parking lot at Lakewood when we bumped into Leanne Darling – apparently they were friends. I was closer in age to Sylvia, Leanne's older sister; we were in the same grade, and had been at both Duke Preschool and CFS together, but somehow I never managed to strike up a friendship with Sylvia despite having a lot of piano-stuff in common.[2] I remember also wishing I could be friends with Leanne, after that meeting, but again had no idea how to go about it.[3]

Shannon introduced me to the music of Isao Tomita; she was into Kate Bush and Prince, and dragged me out to see Purple Rain when it first came out. She seemed to identify with the line "I'm the same old trouble you've been having for years". She wistfully described a recently-deceased grandmother as someone who could "make love out of nothing at all", referencing the then-popular Jim Steinman / Air Supply song; I found it touching that she could feel that kind of connection with another human being. Most of the time she didn't seem to be able to emotionally connect with people, I realize now.

From 1985-1989 I lived in Providence and we didn't talk much. Towards the end of 1989 I had accepted a job at Duke and was looking for a place to live in Durham, parents having divorced, moved out, and sold the house I grew up in. Shannon was all but moved in with Eric at that point, and offered to let me sublet her place on Arnette Avenue if I didn't mind hosting her cat, Danny. (Hilary renamed Danny, who was all white and rather fluffy, as "Ghost". I approved, as I didn't much like the name "Danny" either, but I don't think I relayed this to Shannon. I think one of Danny's meows may appear in the background of one of the recordings I made while I was there.) 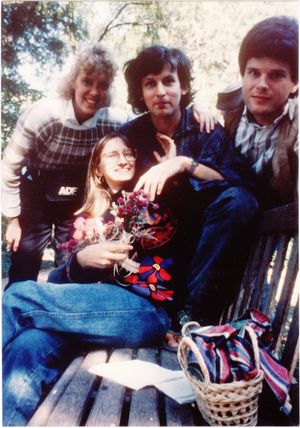 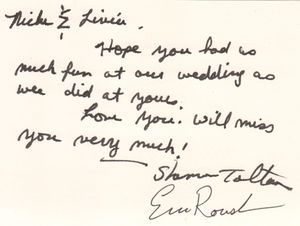 There are some other interesting aspects to this letter...

Shannon and Livia became pretty close during this time; they had a lot more in common culturally (and especially with regard to heteronormativity) than I did with either of them. When Livia and I got married, Shannon and Eric were the witnesses. We also went to S&E's wedding on the beach at dawn, in the Outer Banks near Eric's hometown of Manteo.

Livia & I moved to Georgia in the fall of 1991. We frequently came back to Durham for holidays and such, though, and we would always try to visit with Shannon & Eric and, later, their growing brood.

Three incidents (indecents?) that illustrate Shannon's sense of humor, both of which came up (I think) during this time:

When I moved back to Durham, we got in touch and tried to do business together on a couple of occasions, but we mainly kind of crossed wires on what was needed when.

My last interaction with Shannon was actually one-way – she pasted me a link and some descriptive text; the timestamp was "Thu 11 Jan 2018 04:20:46 PM EST". I was kind of preoccupied at the time, didn't really have a response, and... didn't respond. :-/

My main regret for her is that so much of her creative potential had to be set aside because of childrearing (as often happens). I don't know if she would share that regret, because I think having kids is something she actually wanted to do, despite the known risks and costs – which, as I've explained elsewhere, I really don't understand – but that's still pretty much how I feel about the matter. What happened was terrible, but it's also kind of a metaphor for what the process of parenting does to you (unless you're wealthy) in a society that claims to be all about "family" but provides less and less support for raising children properly... and I think she knew that, going into it.

She knew what she was getting into, and had her eyes open. I was always a bit worried that it would end badly for her... and it did.

It's just a bit more horrible than anything I pictured.