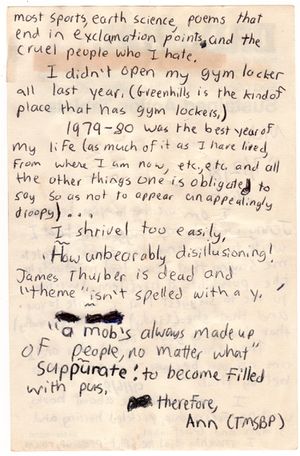 Tigger's first letter to me (back)

Tigger, aka Ann Veronica Simon, was my close friend from 1981 until her death in 2003, and we were travelling/cuddling companions from 1985 to 1989. Unlike with Jenny, though, we had no substantial unfinished business between us and were still good friends – a fact for which I am eternally grateful. The memory of her friendship has been something that sustains me.

She was one of the few people who ever "got" who I was. When I finally figured out in 2000 that the gender issues I'd had all my life were in fact gender dysphoria and that I am therefore transfemale, she was immediately supportive, saying something like "oh, that makes so much sense – you're a girl mouse!"

I remember first encountering her when she and the other Goresum Foursum (JC&E) were still in middle school (1979-80), but we didn't talk and later on she didn't remember seeing me during that time. The year after that, Jenny and I became friends and at some point J decided that Tigger and I should really be in touch with each other. Evidence would seem to indicate that Tigger had begun composing a letter to me in July without sending it, and then my letter to her near the beginning of September was enough to overcome whatever had prevented her from finishing and sending it (probably shyness).

I can't actually remember when we first met face-to-face after having met only via letters, nor can I remember the circumstances behind our first substantial conversation. I don't think there was any overlap between our meeting IRL and Jenny still being alive, so that must have been later. I do remember her visiting for Jenny's funeral, but I remember her staying at E's... it's all very muddled, and deeply shadowed by grief over Jenny.

What I do remember about our first conversation is that we were still both ridiculously nervous around each other, and attempts to converse kept fading quickly into silence... until I started making pretend conversation about how "woody" or "tinny" various words were (after Monty Python). This apparently struck a chord, and we spent the next hour or two going back and forth along this theme.

This kind of thing remains my idea of fun, and apparently it was hers as well. This is just one reason we got along.

I think the only photograph of us together may be from an early MacIntosh-based single-bit imaging system that Microglyphics was considering selling, of which I have only a dot-matrix printout.

After surviving the discovery of Jenny's body in the summer of 1984, I came to the realization that I needed to get to a place where there was meaningful human contact if I was going to survive much longer. (Grief plus social isolation plus gender dysphoria and ADD are a potent and deadly cocktail.) After a bit of revision, I hatched a plan to go live in Ann Arbor (rent an apartment) for the summer, then accompany her to her first year of college at Brown (using my large station wagon to help with the move-in).

Somehow, she agreed to this plan... and somehow it all worked out.

It seemed like 99% of my social life at Brown – all the people I'd met through Tigger, mostly the same class – was graduating. Tigger decided to pursue post-graduate studies at Louisiana State University (Baton Rouge) and... I considered following her, but between a very tempting job offer to research neural networks at Duke University, feeling kind of homesick and wanting to move back to Durham, feeling like my clinginess was ruining another friendship with someone I'd met at Brown, and believing once again that I had found someone (in the Durham area) who could fix the empty-bad feelings to which I was prone (source of said clinginess)... I (reluctantly) didn't follow along.

I packed up everything in the station wagon and drove down to Durham in a pre-dawn snowfall on December 31. (A car spun out of control right in front of me about half an hour into the trip. Fortunately I had noticed they were having trouble and added extra following distance. A couple of unmarked police cars instantly materialized out of nowhere to help; I drove on past.)