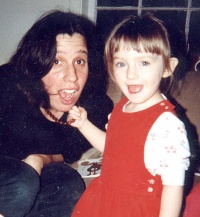 Tigger, better known to many by the pseudonym Ann Veronica Simon stated on her birth-certificate, was Woozle's close friend and confidant from 1981 until her death, and much-beloved godmother to Anna Nikola. As one of Jenny's close friends in the CFS middle school circa 1979, she was a founding member of the "Goresum Foursum" (along with Cindy S. and Erika J.)

Woozle gave her the name "Tigger" – in commemoration of her eternally energetic and bouncy nature – while they were both at Brown, which she attended as an undergraduate from 1985-1989 and where she became a member of the Delta Psi chapter at King House.

She had almost completed graduate school at the University of California at Berkeley at the time of her death; she was granted her degree posthumously. The Ann Veronica Simon Outstanding Dissertation Award (see) was established at the LSU Women's & Gender Studies department in her honor not long after. (See 2006 Ann Simon fundraising letter for details)