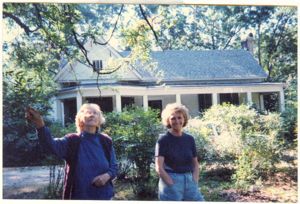 It has belatedly occurred to me that this site has long neglected one of the key members of our extended family – Rebekah Wade, Livia's mom, affectionately referred to as my "mother-out-law"; also known as RBW and Rx.

When Livia and I were considering the idea of moving to Athens to help Livia's ailing grandmother (Rebekah's mother), Mubbie, in the fall of 1991, I was very leery of taking on the expense of moving without having a job already secured. Rebekah offered to help with the expense (and, through Livia, made a few other promises) and seemed generally very favorable towards the idea and towards helping us get settled, which helped persuade me to go through with it. Once we got there, Rebekah helped pay off the moving truck ($200, I think) but surprisingly could not offer any further assistance. Our credit-card debt immediately began to escalate. (Neither the land nor the $10k ever materialized until 1999, when Livia moved some houses from downtown Athens -- but they were never ours to live in, and Livia got to keep them in the divorce.)

In spite of this somewhat rocky beginning, Rebekah always did her best to offer helpful advice to Livia, especially in cases where R felt I might need a gentle nudge in a better direction. She generally declined to speak to me directly about these matters, fearing (perhaps rightly) that I might be able to rationally justify my actions and thus evade her corrective tendencies – which were (of course) only intended for the best.

For some years now, Rx has apparently had the assistance of a "lawyer friend" (presumably someone at the law firm for which she used to be a courier, I think it was Hutson Hughes and Powell but I don't have any direct confirmation of that) who apparently keeps her updated on the web activities of Anna Nikola and me. He apparently bills himself to her as some kind of computer wizard/cracker (she misuses the term "hacker" to describe him), but from all the evidence we've seen his only real computer skills are a firm grasp of how to use Google.

a little history on this

In 2001 or so, I had put up some web pages about my then-recently-discovered gender dysphoria condition. Although those pages were not password-protected, I did not link to them from anywhere else, so no family members casually browsing my other web projects would have been likely to find them. The Lawyer Friend, however, somehow managed to do so, and told Rx.

There were several ethical things Rx could have done at that point, as I see it. She could have:

She chose none of these actions and instead went directly to my parents, ranting about the site in some way (I still don't know exactly what she said) until family members eventually pressured me to take it down – mainly because they were tired of hearing about it from her. (I haven't put it up again due to lack of time and being involved in a lawsuit where the defendants might have found a way to use it to confuse the issues, which was a specialty of theirs.)

Since then I've heard that she has ranted multiple times about my web activities, but never anything specific and never anything said directly to me. Between that and other criticisms I kept hearing relayed from family members, however, I finally got tired of it and sent her this note. We seemed to have arrived at a truce of some sort, and no more was said (or, at least, relayed to me).

Just recently, however, Anna set up a blog (in Dec. 2007), and of course LawyerFriend found it (in Feb. 2008) presumably by LF's l33t ability to follow links from YouTube (where Anna has an account). Rebekah has apparently demanded that Anna remove the blog from public view, with the threat of withholding Anna's allowance if she didn't comply; Anna, doing her best to play the part of the spineless nobody that Rx wants her to grow up into, has done so.

I do not intend to let this stand. Therefore:

A brief chronicle of our correspondence; this doesn't fairly represent her point-of-view, I'm sure, as I haven't yet located any of the replies she may have sent, not to mention the original letters to which I was responding in some cases. I'll post them as soon as I can find them.

*My contract at Duke had just concluded and I was reeling under the weight of unplanned expenses from a job-related trip shortly before that, so I was extremely reluctant to leave Durham, where I had job contacts and where there was a lot of computer activity – especially right in the middle of a huge recession. It turned out after we moved there that The University of Georgia, which would have been my most likely prospect for quick employment, had instituted a hiring-freeze... so there simply were no new jobs for programmers.

Apparently there's been some misunderstanding about when Anna was needed down in Athens, and apparently Rebekah very badly wanted to drive Anna down herself, today.

I had been told some time ago that Anna was needed in Athens on August 6, and I agreed to drive her down on August 5 (August 4 being a Friday, on which we usually do a lot of errands, so it would not have been convenient and I'm sure I said so in whatever conversations there were in which we worked this out). I posted this on the calendar on June 21 at about 4pm, as can be seen in the history. Email from Livia on June 21 confirms this understanding: "Joel's confirmed Aug. 6-11 for springs in FL with Brenna (and her mom). Can you be prepared to bring Anna either that Friday or Saturday depending on her energy level?"

Next, on Thursday (the day after Rebekah had planned to pick up Anna for a lunch, so we left Anna out of our lunch plans, but then Rebekah canceled so that Anna had to fend for herself as we had already eaten) when Rebekah came by to pick up Anna for Part 2 of the summer's travels (i.e. the trip to California), I mentioned taking Anna to Athens; Rebekah did not object. (Sandy was present for this conversation, and confirms my recollection.)

Finally, this morning when we picked up Anna from Rebekah's house (they having both returned from California late the previous night), we confirmed again that we would be taking Anna to Athens. Rebekah offered to take her down, should we change our minds, but did not object to our doing it. (Sandy was also present for this conversation.)

Then this evening we get a call from Livia, who apparently thought we were on our way, but seemed perfectly okay with my explanation that we were coming down tomorrow. A few minutes later, Rebekah calls and talks to Anna, and tells her that she is "very disappointed", presumably that we did not drive down today. Livia calls and talks to Anna a few minutes later and tries to convince her to go down with Rebekah, who is apparently terribly hurt by the situation (it's not clear how); it's also not clear whether there has been a misunderstanding about the dates, though Anna gets the impression that she was "supposed to be there today".

The above should set the record straight. We worked out back in June that we were going down tomorrow, and nobody gave us the slightest reason, until earlier this evening, to think that the plan had changed.