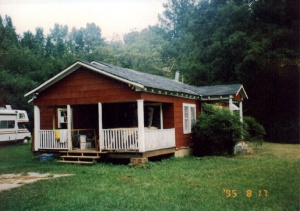 The Red House was the informal name of the residential property located at 2895 Danielsville Road; it was repainted green sometime around 2002, and is currently one of several small rental houses on that stretch of Danielsville Road.

The Red House was the home of Red House Media from 1995-2002, and hosted a number of small musical festivals in its backyard, most notably Day Trip (April 1996) and Shanti Fest (October 1996); more about these later when I find my notes. (The current owner no longer allows public events or large parties on the site.) I still have the DAT recordings of Shanti Fest.

(Note: Unity Fest (1998) was not held at Red House due to communications issues between myself and the organizers, possibly exacerbated by Bubba's assistance as go-between. This is a story unto itself...)

It was rather similar to the place described in this article, among others:

At the time, I saw it as a way of both bringing community together to make music (and possibly other art) but also bringing in money to help maintain the land. The then-owner was very nervous about this, but was reluctantly tolerating a certain amount of musical activity. When that person died, her daughter took over and basically put the kibosh on the whole thing. She didn't give clear reasons for this, but I got the impression that she considered the whole thing undignified in some way. Ironically, the daughter lives in Chatham County, where architect James Carnahan didn't seem to find anything undignified about hosting music and theater gatherings on his property. Neither did the new owners when he sold the land.

When I look at this article, it makes me feel a little ill because it's pretty much exactly how things could have been with the Red House backyard; it had the same kind of reputation locally, and the stage there was actually larger than the one at the Chatham County place. A number of people, myself included, put in an awful lot of work towards the goal of having it as a place for cultural events, and it was all basically for nothing.