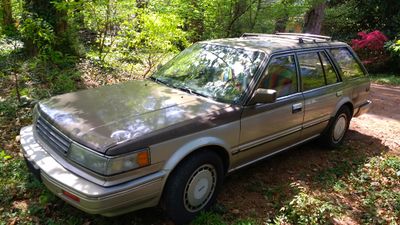 The Nissan, age 30: So many little things not working...

Nissa the 1987 Nissan Maxima station wagon is the second car I ever owned; I got it in 1996, to replace the stolen Dodge.

Although there seem to be a quite few sedans of this same model and vintage on the road, the station wagon is apparently quite rare -- as evidenced by how long it took me to get a replacement tail-light after vandals smashed one of them in with a pumpkin in 2006. Admittedly, the place I took it for inspection in 2007 and 2008 simply overlooked the problem, so I didn't start really looking until 2009 when I started taking it to Durham Auto Diagnostic -- much better mechanics, but also a smaller operation very worried about keeping their inspection license. Apparently in NC you can't just patch the lens with red tape, you have to actually replace the part.

The manufacturer initially quoted something like $300, but then admitted they were out of stock and the part was no longer being made. (I confirmed this from a separate source.) One online store claimed to have the part, but they didn't. That left me with this situation.

Eventually, an online friend in Norway found one on Ebay, for a ridiculously small amount of money (something like $40 including shipping). When it arrived, the part was marked "1986" -- so apparently the tail lights are the same part for 1986 and 1987.

Before the tail-light became an inspection show-stopper, there was a freak windstorm on July 4, 2008; it did this:

I actually repaired the window myself, with a used part which cost something like $20 -- though it took me many months to get around to it. Taking doors apart can get ugly. Putting them back together is worse. And of course there were small chunks of safety glass everywhere.

After finally replacing the broken tail-light, the car passed inspection in 2010 (probably late Fall), but I was told that the tailpipe really needed repair in order to pass again, and they really hoped I would do that before driving it around anymore. On the way home, the exhaust suddenly got much louder -- so I decided not to drive it until that could be taken care of.

The problem was that I didn't know how much this would cost, and money was particularly tight for awhile -- so I basically had to leave it sitting there (again) until I had enough money to have a reasonable shot at affording a tailpipe repair.

That time finally rolled around the month before inspection was due again (August 2011), and I finally tracked down the muffler repair shop that had been recommended to me (more on these guys later -- we recommend them, and I have photos) and we drove there in separate cars, expecting it would take them a couple of hours (possibly days) to look at it and give us an estimate.

Nope. The guy put it up on the lift right away, and said he'd fix it for $35. We said sure; he repaired it (pausing only to note the improper positioning of part of the tailpipe installed at Jim Hawkins several years earlier, which causes it to rattle/thump -- confirming my diagnosis), we gave them $35 drove back home in our separate cars.

At this point I thought victory had finally been achieved; I took the Nissan back to Durham Auto Diagnostic for inspection -- but now they tell me it needs at least new tires ($400) and a new windshield (which they surprisingly estimated at under $200, if I remember rightly), and a couple of other things possibly -- $500-$1000. Frank was all but advising me to have the car scrapped.

I was initially (and very regretfully) inclined to go along with this (especially given the state of the roof), but then it occurred to me: none of these problems are systematic; they're all due to maintenance issues piling up while the car wasn't being used because it couldn't legally (or quietly) be driven.

Plus, on top of that, this is a car that had been willing to start right up (after only minor battery charging) despite sitting for about a year. Some cars, I'm told, have problems when you leave them for just a month or two.

So I've caulked the roof (no detectable leaks since then, despite several major downpours) and I'm trying to put the money together for tires and windshield. If we hadn't needed the extra $1000 to pay off the credit line at BB&T so we could switch banks, I would have had it in October; perhaps I'll have it in November.

(This turned out to be especially handy on 2011-11-02, when jumping from the Nissan was the only way I could push enough amperage to get Janis Jalopy started in time to do an urgent errand.)