I am no great help am I?* As to Saturday in Egypt, I found myself coming out of it knowing less about you than you do about me. I now know your stand on drugs and the like. I feel an awful amount of resentment toward society and those people. I could sense your fear of not being in control, I feel it too.

I do know more about you than I did before. The very fact that you came told me a lot.

While we were talking, I didn't feel awkward – because you didn't. (?) (Oh BOSH! Here I am again not knowing what I feel.)

But I came out of the "meeting" knowing more about you. Things I couldn't put into words. But I think I have a better feeling about you, and of you.

Yes, you embarrass me. Read what I wrote in that one letter that seemed like garbledygook to you. I don't [know] why I am so fussy about material things – I just am. Yes, the bike bugs me. You do walk don't you? Your legs go back and forth and all?

I'm just a social-minded, aristocratic, stuck-up snob who can't be seen with anyone that makes her appear less so than she wants to appear.

Yes Nick, everything I told you is true if you have any doubt. Maybe the way I said them wasn't

I told you the worst possible things about my family. Why? Was I being dramatic?

I'll tell you one thing. I came out of there feeling as though I had done what I needed to do. I went in with things I had in my mind to say and I said them. I felt you had a right to know.

Oh, by the bye, "fat face" was none other than a psychologist. That's why I had fits when you told me what your dad does. If there's anything I can't stand it's a person who has a degree because you have problems. And they tend to think that they have a better idea of you than you do. I hate analysts! So I didn't work in school?*

Friends helps a lot. Everyone is so understanding and all. I feel the strong community there (here) that my church wants me to feel about it.

I remember now that on the night of great frustration when I couldn't get my homework done, I had had a dream.

First may I say that at one point I was having absolute fits. I was so frightened that I wouldn't get credit in this course and Mom & Dad would get worried and do something drastic – like send me to Highland, I kept asking (begging is more demeaning but truer) you to tell them that I wasn't crazy. Somehow at that moment you seemed the closest person. I was pacing back and forth and I finally collapsed on the floor next to my bed. Sometimes I get really worked up like that. I was on the verge of calling you and ask[ing] you to tell them that I wasn't out of my mind, but I did a quick turnaround like the one you witnessed in Egypt. I got ahold of myself and then got into an argument about truth with myself.

It lasted me till time to go to bed. By then I had formed no conclusion except that there is no conclusion. But I came up with some interesting theories.

I never dream about things that happen right before I go to sleep. I'm safe after late night movies.* But I actually had a dream just like my earlier fear.

I remembered it in the morning and remarked on it to myself so I wouldn't forget.

I never write down my dreams the day after I had them, no matter what. (ask me about dreams & my comments thereof)

Anyway I can't remember the dream now – just that I had it. It's a good thing I thought about it because I remember remembering it.

Some[one] wanted to take me away because I wasn't well adjusted in school. "Nick, tell them I'm not crazy!" and I think you did.

But I must have been really scared to dream about it.

Naomi – [ something crossed out, almost legible ]

I saw Logan's Run ...And Justice for All

Apparently I hadn't yet switched to using the date-of-receipt for my penciled-in timestamps; clearly I had to have received this no earlier than 11/24, but I wrote 11/23 for the date. Probably she gave me the note at lunch on 11/24 (Monday).

I wish I could remember what "Saturday night" refers to.

I find it odd to imagine that she thought I might not have showed up. I guess that wouldn't be uncommon behavior for other people in whatever categories she was using to model her expectations of me at that point?

I remember her suggesting a couple of previous times that we chould meet "in Egypt", but I thought she was joking, referring to the country. Apparently in her circles "Egypt" was commonly used to refer to a nearby abandoned development, but I had never heard the place called that before. I think the development was "Chesterfield" or something like that, and my family tended to refer to it that way.

Filling in the gaps between the pieces I know and remember, here's what I think happened: on that day when we walked home splashing in the puddles, we got to talking about how nice it would be to spend more time together away from school. Neither of us wanted to do this under the eye of parents (or, indeed, let our parents know that our interest in each other had developed to this point, due largely to the incorrect assumptions they would make – cf "three girls drooling over you"), and she suggested meeting at Egypt on Saturday, when either of us being absent from home for several hours would not be surprising. Once we got our nomenclature straightened out and I understood what she was talking about, I thought it was a great idea.

"Not knowing what I feel" is, I'm told, a sign of depression. This comes up several more times in later notes.

This is pretty much exactly the bike I was riding, including the color, with slight modifications: I tended to leave the "picnic bag" off because it made the bike more noisy when going over rough ground (which I did a lot); I think by this time I had also removed the chain guard and maybe the front fender, because they tended to rattle. (another sample)

I was surprised that she found it embarrassing, or that there was some issue with me riding to meet her (2-3 long suburban blocks away from my house) rather than walking. I'd never had any reason to think anyone seriously would.

I'm pretty sure “that one letter that seemed like garbledygook to you” was Note #6... and I think I knew what it meant; I just didn't want to think about it, because it meant less Jenny-time. Jenny-time made me feel less terrible, sometimes even good. Less Jenny-time meant sads.

Her discussion of “fat face” and psychologists/analysts in general is a good example of her feelings towards therapy, and a large part of why none of us looked in that direction for help when we knew we needed some. It sounds like all the therapy she had experienced so far had been, not to put too fine a point on it, rather bad or at best inappropriate for her needs... and my only experience with therapy had been the school counselor at DA, who was nice and non-judgmental but didn't really seem to understand my issues much.

I have to clarify what Jenny wrote here, because it confused me for a long time. I never really tried to get it straightened out until now, because (as with many things) it just hurt too much to read her notes, much think about them in depth – but here's the sequence of events as I understand it now:

It was only later that I understood how shockingly justifiable Jenny's fears were.

I'm sure this is one of the things she told me about, that day in Egypt, but it was all verbal and I've never been good at taking in facts verbally: When Sandy was in the thrall of an abusive boyfriend, the solution was not to charge him with abuse, or to get a restraining order, or even to offer Sandy counseling, but to put her in an institution, involuntarily (There were other aspects of the situation that seemed designed to erode her self-confidence and agency as well; see Woozle/Sandy/Highland.)

This kind of "solution" was apparently shockingly commonplace. As an example of what was regarded in the medical culture as a "cure" only a couple of decades earlier: Rosemary Kennedy, JFK's oldest sister, had "behavioral problems" probably emerging from severe learning disabilities, and was given a frontal lobotomy (at age 23, in 1941) pretty much for the sole reason of curbing her behavior so she wouldn't embarrass the family. "The majority of lobotomies were performed on women; A 1951 study of American hospitals found nearly 60% of lobotomy patients were women; data shows 74% of lobotomies in Ontario from 1948–1952 were performed on women."[1] The procedure was incredibly crude and, as far as I can tell, not subject to any kind of scientific evaluation before it started to be used – and failed horribly in Rosemary's case. I can't understand how they would expect the methodology used (keep cutting until she gets incoherent) to produce better results. The US was not among the first to begin abandoning the procedure.

A relevant quote just came across my radar (emphasis mine):

In 1994, Gregory Corso was asked, “Where are the women of the Beat Generation?” He said, “There were women, they were there, I knew them, their families put them in institutions, they were given electric shock.” Some of them survived...

It's not that Jenny was necessarily in danger of her parents choosing anything so severe; it's the medical community's utter lack of regard for the intelligence and integrity of the patient, and disrespect for the patient as a person, if that patient was female, that I find so intensely disturbing. Even if she never actually ended up being "treated" again, she constantly had to live with the fear that her next failure (real or perceived) might bring her back into that scope, and that some of those more extreme solutions might be on the table... and her parents were generally inclined towards following the advice of whatever expert had been selected as the go-to for the current problem.

This was no doubt the source of a lot of her intense "good girl" tendencies.

“But I must have been really scared to dream about it.” Yes. I can tell you were. I'm so sorry, Jenny. We could see the lake of psychic toxins filling up around you, and there was nothing we could do to stop it. La la la la, wading in deeper..." 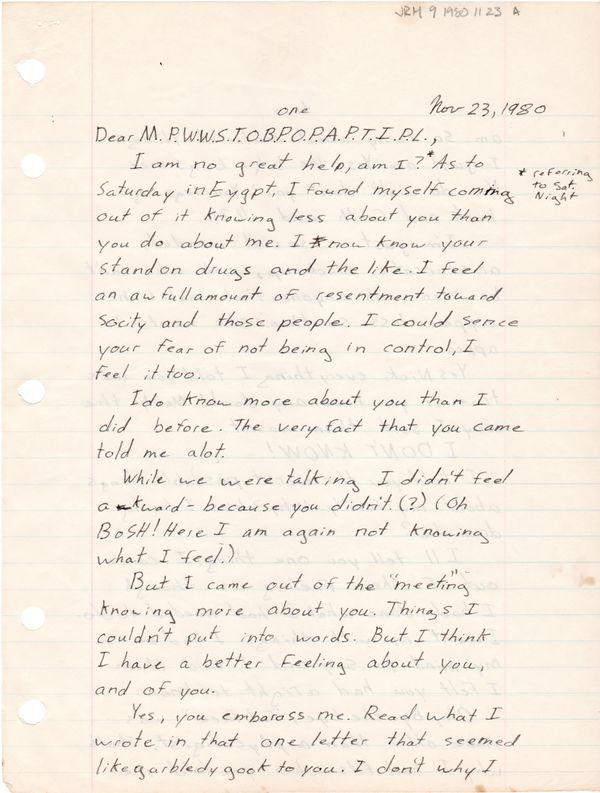 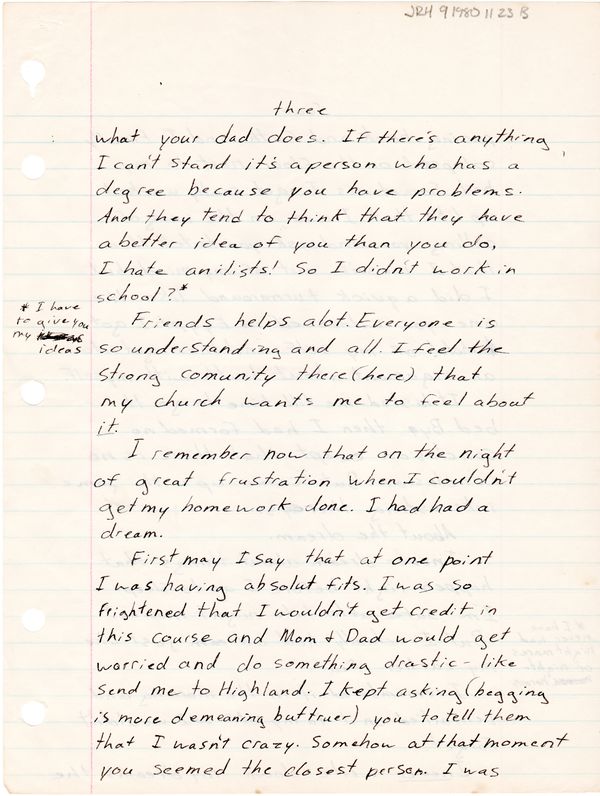 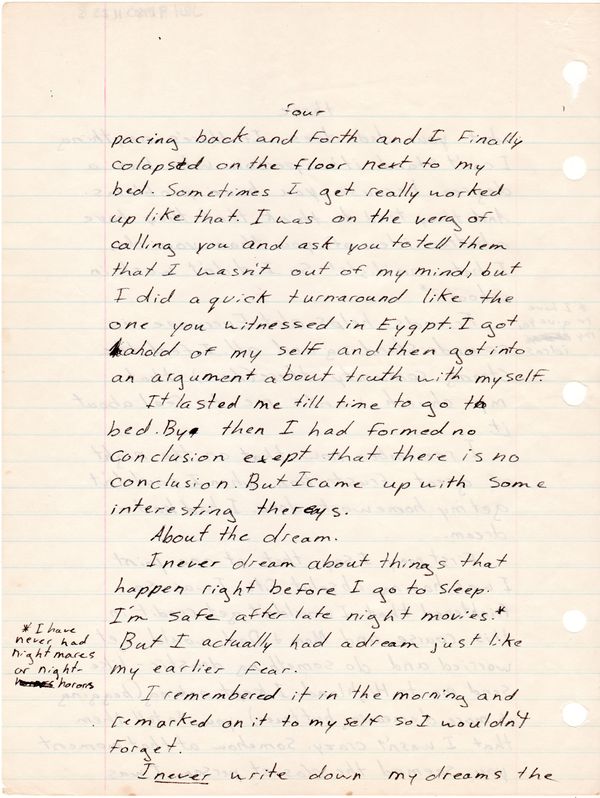 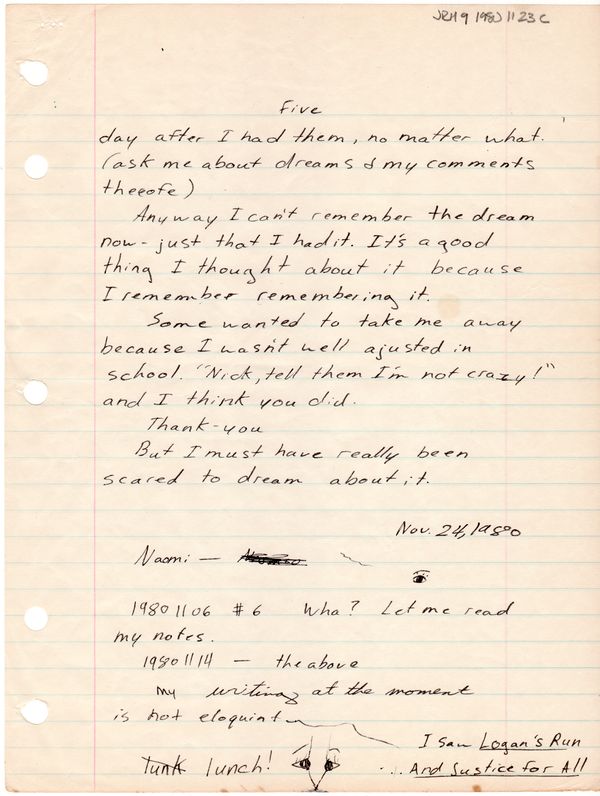