Well I gave you a huge hint in my last letter. I want to grind this in (You are so ssslllooowww!)

I am a, Member Of The Crazy Person's Society And Other Informal Groups Of Weirdos Throughout The World. M.O.T.C.P.S.A.O.I.G.O.W.T.T.W. See? Boy don't you fell silly!

Both my parents just happened to "casually" ask if you had spent the night at Cindy's ("ha ha"). My mom said she thought that you were enjoying yourself with three girls — (I can't remember her exact words but it was something to the effect of) drooling over you. She thought it was quite amusing.

Does this reflect your personality?

Today feels like a Sunday. Today at noon I went to church. All Saints Day is a holy day of obligation. [squiggle]

If I tell you what number your last

Why yes -- I did at that point feel pretty silly, not to mention a bit stupid. I probably totally deserved it, given some of my behavior as far as correcting others when I found a mistake (e.g. Note #3). I don't think I realized at this point that boldly correcting people whenever you catch them in a mistake can come across as haughty and condescending.

It was never intended that way; I was taken very much aback when I found out that this thing which I'd been pretty much taught was good and a sign of competence or something was in fact kind of hurtful. Maybe that means I didn't actually (completely) deserve it? Either way, I can understand how it might be seen as a taste of my own medicine, even if it wasn't really my medicine and I was just passing it along and continuing the cycle.

if you had spent the night

I don't clearly remember what this refers to, but from the vague memory-strings it pulls (plus the big clue of the particular date upon which the note was written), I posit the following:

At the time, I more or less accepted this as the way of things; there were multiple reasons – some good, some understandable if not actually good – why I couldn’t have been included in the sleepover (short version: it would have required a significant and not-yet-justified extension of parental trust), and certainly it wasn’t due to any malice or deliberate exclusionism from J, C, or E. They probably would have included me if it had been allowed.

In retrospect, this kind of thing happened quite a lot, with each instance reinforcing a lot of negative messages that I mostly had to deal with on a subconscious level. To oversimplify somewhat: they might accept me as one of them, but society didn't.

This is underscored by Jennysmom’s use of whatever word or phrase equated to “drooling” (I’d guess “mooning” or “sighing”).

People – both peers and supposedly-wise elders – kept trying to shove our friendship into heteronormative boxes, kept assuming that our interest in each other was primarily "romantic". We all firmly rejected this – collectively, individually, and through our actions towards each other – but it was a constant background battle.

The pervasiveness of this unspoken narrative about what was really going on with us possibly denied us a certain amount of social support, later on when our friendships became strained and finally broke, that could have helped us work out our conflicts. (Not that friendship in general was taken all that seriously, but “romantic” relationships at that age were generally put in an even lower tier; they were considered transient, experimental, and disposable.)

Although I understood why it couldn't happen, I very much would have liked to be part of a sleepover with them, even if I had to sleep in a different room in a separate part of the house. (Note that I hadn't yet reached the point where I liked hugs and cuddles. I was still very non-tactile.)

I was constantly at war with myself over my actual motives for this, and the fact that said motives were generally assumed to be fundamentally carnal (the same assumption being made about their primary interest in me) only exacerbated this.

the war of attraction

Yes, there was physical attraction (confession: I would have loved to see J in a nightgown or pyjamas), but it wasn't cis-het; it was desperate curiosity about the experience of wearing a female body.

My main motivation, though, even in hindsight, was that I wanted to spend more unstructured time with them – and more to the point, interact with them as equals; to be part of their group and belong.

Jenny later confessed to me (in a note, in passing) that her initial contact with me (at Quaker Lake) had been primarily inspired by physical attraction – but I think by this point she had moved past that, at least a little. She later had her own intense conflicts between the physical and the platonic.

It's hardly a wonder we were confused about a lot of things.

My history with Matt actually pre-dates CFS by a few months (we had been in the same class at the Durham Arts Council summer school, doing stop-motion animation), but with whom I am now out of touch for slightly awkward reasons. I should possibly write more about this.

"I am an angel of the lord" was a quote from Star Trip (at 0:35), a semi-funny Star Trek parody that had recently played on the Dr. Demento Show (which I listened to without fail every Saturday night at 10 pm until WRQK abruptly stopped carrying it). Any connection to the banana skin was tenuous at best, and probably just me being randomly associative as my humor often was at that time. Jenny hadn't yet socialized me much. 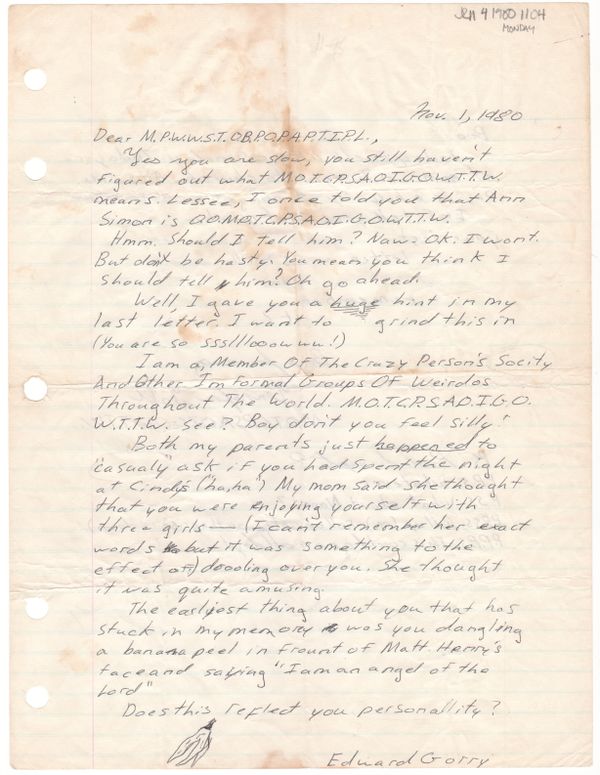 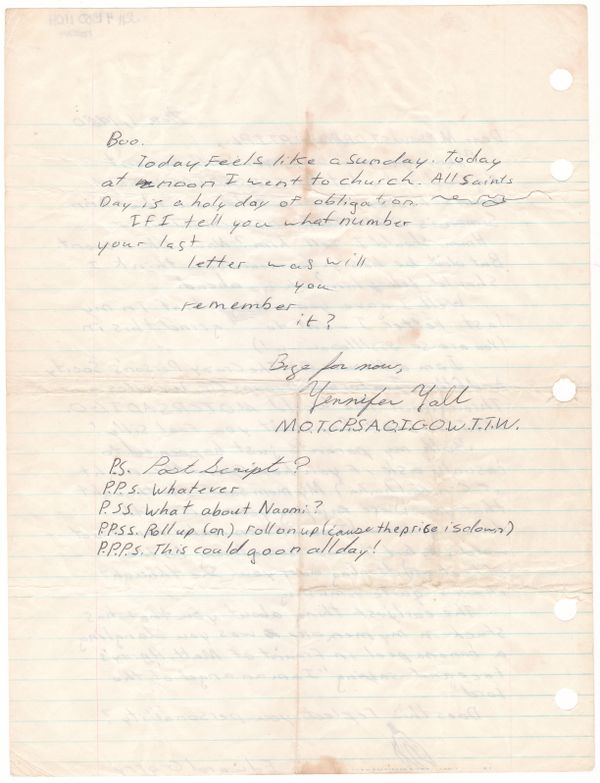