I started to write "There's not a lot to say about this one, except..." and then went on to write a lot.

Correction on my name:

Jennifer (Jenni, hence Jenny / Derived from the French Genivive derived from Gwenivire)
Ruth (not Ruthy or Ruthie)
Hall (as in corridor / not H-e-l-l and not as in U-)

As for my Deutsche Spreche – I can understand simple sentences in context but not unconnected sentences and words bigger than entschuldigunge. I wouldn't be of much help. Und is 'and', war is 'was', was is 'what', mein is 'my', es is 'it', est is 'is', Sie is 'you', sie is 'she', du is 'you' (informal), das is 'this'. 'the' is der die (pronounced "dee") und das depending on the gender of the object.

So much for the German lesson. You know about w, I hope.

Ahem! We (my family) has been boycotting Gallo wines for the past five years or so because of the grape-pickers were treated so bad.

The union stuff is settled now but still Gallo is cheap wine. Liebfraümilch (¨ is an umlaut) is very nice especially the white wine (as you may have guessed it is German).

I am sorry about the unfortunate happenings that happened to the Mysterious Person Who Writes Stupid Things On Blank Pieces Of Paper And Puts Them In People's Lockers' note / letter. But George (better known to you as Ben Mansell) is so maddening at times!

I believe that you said in reference to my last letter "You're crazy!" Well I belong to a club which flaunts it. In fact I am a member of the crazy person's society and other informal groups of weirdos throughout the world. Do you belong to any club? (Sci fi book club?) 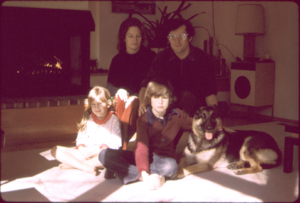 The Staddon Family, about 6 years earlier. See if you can guess which one is me... or, actually, don't. Just pretend I wasn't there.

Both of our sets of parents were the sort of people who hosted and attended academic-professional parties where wine is served. My parents were apparently fond of Gallo, which does indeed have a contentious labor relations history. I'm pretty sure I remember Joan Preiss (the Preiss family lived directly across the street from us) holding meetings about this in the late 1970s.

I was being amazingly oblivious on page 2. I had been nagging her to tell me what M.O.T.C.P.S.A.O.I.G.O.W.T.T.W. stands for, and here in this note she tells me, straight out... and I didn't catch it, and kept nagging her about it. >.< (So much for proving that I could keep up with her.)

I also called her "crazy", which I'd feel terrible about now except (a) we were still in a "gentle mutual teasing" stage of friendship (see "goats and monkeys" in note #2) and I had no idea that she was actually worried about her sanity and parental perceptions thereof, (b) the idea of accidentally stigmatizing mental illness (as a thing to avoid) wasn't something I was aware of, if indeed it had been invented yet, (c) it wasn't intended or taken seriously, and (d) apparently I made up for it later on several occasions by pointedly telling her that she was not crazy and did not need to be institutionalized.

Another thing I shouldn't have done is compulsively correct her spelling. I even circled some of her misspellings on page 2, as if I were going to grade it and hand it back to her. Apparently I was not yet aware of her mild dyslexia, which primarily resulted in her having extreme difficulty spelling certain types of words. I remember having a conversation with her about it not long after this, at which point it finally clicked in my head that this was something she couldn't fix, and therefore kind of mean of me to make an issue of it – though I had to go through a bit of cognitive dissonance first.

Looking back on it, the attitude I'd always been taught is that if you aren't spelling things right, it means you're not really trying or else you just haven't been shown the correct spelling often enough. It is therefore helpful whenever someone corrects your spelling. This is consistent with a lot of other attitudes we got from our parents, broadly summarizable as "if you're smart but you're not doing well in school, then you're not trying hard enough". I was constantly being told how much "potential" I had and how I wasn't living up to it. A lot of sentences began with words to the effect of "I can't understand how someone as smart as you...". Depression wasn't a real thing or only happened to other people, and I think when I suggested one time (as a theory I had arrived at independently, so of course I had nothing but intuition to back it up) that not all brains are wired the same, my father the experimental psychologist outright denied the possibility.

As discussed elsewhere, I even believed that the idea of brain gender being distinct from body gender was logically impossible – even though the dysphoria caused by exactly that problem was a huge issue for me by this time, leading to lack of motivation, depression, and other things that I wasn't allowed to claim.

My hyperfocus on fixing her spelling is probably the main thing which distracted me from noticing that she had in fact told me what her acronym stood for, although my general tendency to panic slightly whenever any of them would keep information from me probably contributed as well.

My theory about "Linda Clark" is that Jenny saw the name "Clark" on the mailbox at the given address on Kerley Road and decided to invent a character around that, because that's the kind of thing she liked to do. (There apparently is or was someone named "Clark" at that address, but I can't find any evidence of a "Linda".) The address is near one of the routes from our neighborhood to CFS though not actually on it. 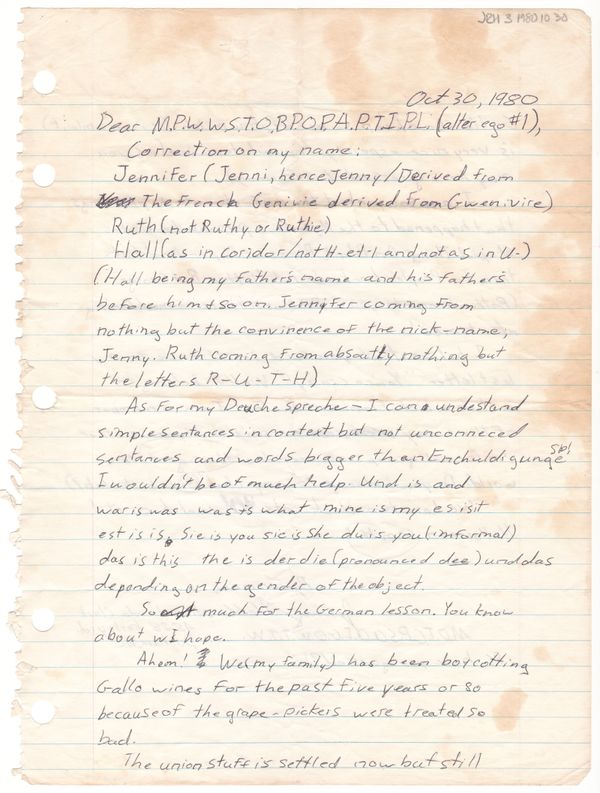 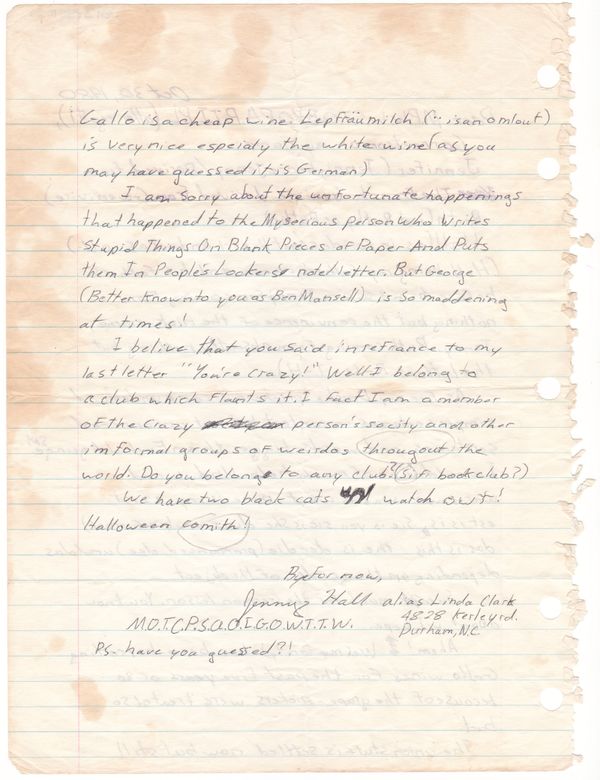