Apparently many people believe that this reform -- for which many of us campaigned, blogged, or postered -- was forced on us by a government indifferent to our pleas for mercy. Or maybe a small cabal of us forced it on the rest of the country through our insidious back-channel connections to Barack Obama's secret squadron of black-ops mind-control goons. 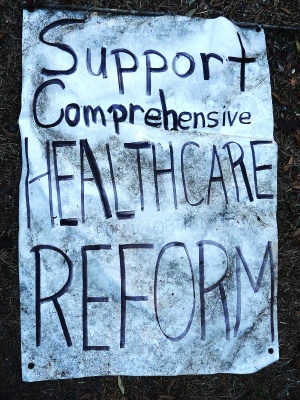 Obama threatened to take away my guns if I didn't make this sign. Really. It wasn't my idea.

Here at Hypertwin Manor, we had a hand-made banner in our front yard reading "SUPPORT HEALTHCARE REFORM". I had hung it from a tree with fishing line, and the slightest bit of wind tended to bring it down, so I often found myself picking it off the ground and rehanging it shortly before dawn as we waited for Josh's bus.

So I hope you'll understand if I get a bit sarcastic when I'm told that we didn't want Obamacare and that it was forced on us.

No. We wanted more than we got. We wanted the "public option", which Obama took "off the table" as a concession to Republicans (thanks, guys) -- who then proceeded to unilaterally oppose the watered-down results anyway. (Thanks again.)

I can only conclude that I was somehow brainwashed into thinking that affordable medical care would be a good thing all around -- or perhaps I'm a member of the ruling Liberal Elite and didn't even know it. (This must be what I get for not going to the meetings.)

The bus driver liked our sign, too. Hmm, I can't think what the Liberal Elite is doing letting in riff-raff like that. (Or like your friendly neighborhood Hypertwins, for that matter... I'm not sure I want to be a member of any club that would let in disreputable people like us.) 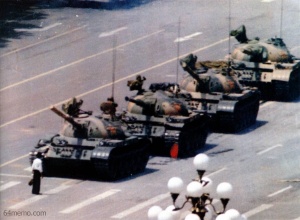 Brave US citizen attempting to prevent Obama's secret Afro-Muslim CareTank Squad from brutally imposing unwanted healthcare (on their way back from confiscating everyone's guns) -- where o where was Chuck Norris when we needed him??

"Of ten polls conducted just prior to the passage of the bill, three found about equal opposition and support, five found a plurality expressing opposition, and two found a majority expressing opposition."[1] In other words, support was a little less than 50-50 -- hardly a majority being steamrollered by a minority. (The same source notes that support for one of the most contentious parts of Obamacare, the "individual mandate", ranged from 56 to 59% when it was mentioned that this would help subsidize those who could not otherwise afford insurance. It also informs us that support for Obamacare overall was well above 50% in the generally less privileged sectors of the population.[2]

Repealing it -- at least without installing something as good or better in its place -- would therefore be going against the wishes of more than half of America.

The people who originated the claim that America didn't want this reform are, plain and simple, liars.