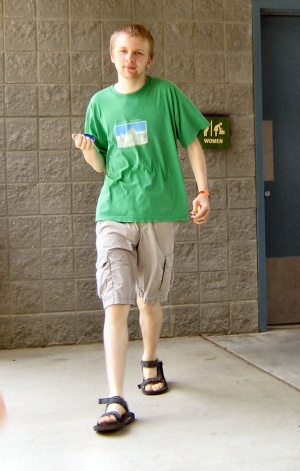 Josh at the NC Museum of Life and Science, July 2009

Josh (born 1992-12-12) is Sandy's second-oldest. He is autistic. He is generally unable to communicate, even using hand-gestures (pointing, touching object, holding up object).

He is very healthy, though, and quite clever, dextrous, and strong. Given all that, he has always been a little difficult to control -- but he was generally happy as a child, so it wasn't as much of a problem.

Since hitting adolescence in 2007 or so he has gotten much bigger and stronger; he is now larger than Sandy, and able to resist all but the most strenuous and determined efforts to force him physically.

Josh is also unusually interactive for an autistic person; he smiles, gives eye contact, laughs, and plays possum sometimes when he knows he has to do something but doesn't want to; his main issue seems to be with communication.

Josh has been happily living in a group home run by RHA Howell since late Feburary, 2011. The story of everything leading up to that is here.