The worry here seems to be that The Government is going to take more money from people, one way (insurance) or the other (penalty for non-insurance) -- another form of taxation, increasing the size of the government and its confiscatory power. It's also "government interference in people's personal lives".

There's some truth to this one, but once again the oversimplification hides some important details.

Some details, just to get them out of the way:

A. There is no penalty yet; it takes effect in two stages, the first of which is in 2014, when there will be an annual penalty of $95, or up to 1% of income, whichever is greater. Considering that this minimum is roughly the cost of a single doctor's visit, this should not be a problem. We have three years for things to settle down -- three years in which to iron out any wrinkles or protest any outright injustices in the fine print -- before we have to have insurance.

B. More significantly, by 2016 the penalty will be 2.5% of income or an annual flat fee -- whichever is larger -- of $695 for an individual or $2,085 for a family. There will be exemptions to the fine in cases of financial hardship or religious beliefs. This is obviously a bit more of a worry. However, some things to consider:

First: The last time I had insurance -- and I'm told it has gone up considerably since then -- I was paying something like $400 per month for a family of 3, which translates to nearly $5000 a year -- more than twice the family penalty. Sure, some people (including me right now) still can't afford to sock away $700/year for themselves or $2k/year for their families -- but then consider this: 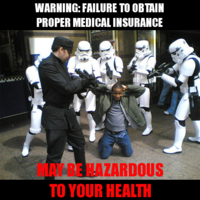 Second: Given that insurance under Obamacare is essentially guaranteed to be affordable (see Myth #2), the "financial hardship" exemption doesn't even seem necessary -- if your income is such that you can't afford a penalty on that minimal scale, your healthcare will be subsidized or possibly free -- but there it is, just in case.

Given all that, if you think there will still be Americans who will end up getting socked with a fine they can't afford, then I'd like to see what your scenario is, because I can't quite picture it.

Unfortunately, ethics aside, there's no way to isolate individuals from the benefits of these various forms of "government interference", so we're all in the same boat. Personally, I think this boat sounds a lot more attractive than the "bring-your-own life-jacket" option.

Fourth, finally and more critically: if a law benefits millions of people but has a few pieces that are arguably harmful in some way, wouldn't it make more sense to campaign to have those bits fixed rather than throwing the whole thing out?

And if you throw the whole thing out, what are you going to replace it with? Everyone -- conservatives and liberals (and me) -- agreed that what we had before was unacceptable and broken. How can it possibly be an improvement to go back there?