The Cheap Imitation was the name I used for my original musical recordings from approximately 1983 up to 1994 or so. (The idea is that the recordings are mostly just me, overdubbed, and not a real band at all -- just a cheap imitation of one.)

In 2005, I decided to start using the name "Woozalia" for solo recording, and set up woozalia.com. Most of this stuff has been moved over there, though not all of it.

These tracks are freely redistributable under the Creative Commons Attribution-NonCommercial-ShareAlike license. Permission may be given for small-scale paid reproduction (as in listening clubs), but do ask first. 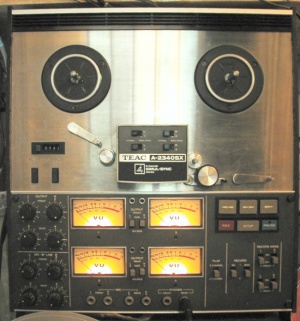 These were all originally done on a quarter-inch 4-track reel deck from roughly 1983-1991 and then remixed digitally in 2003. (Currently only one track; others are in progress.)

These were also done on the quarter-inch 4-track reel deck, but mixed using a hand-wired patch-bay thingy made from a cigar box.

Daydream of the Psychoanalyst

The song happened mainly because of the really short sequencer on my Ensoniq Mirage; the darn thing only had about 128k and its sequencer had an upper limit of about 15 seconds. The Mirage died in 1995 and I got an EPS-M (rackmount version of the EPS), which is still very cool even if it is now also out of date. I expect I will be using the EPS for future recordings (it was used on one track of the Xmas CD Project, 2001).

All the audio on this page is released under the Creative Commons license (same as the wiki, even though the files are off-site). For the purposes of the license, the author is Woozle Staddon; attribution should include a link back to http://woozalia.org (or to this page if you prefer). If anyone does want to produce any derivative work, I'd be interested in hearing about it -- and I'd probably be willing to share source files so you have a higher-quality original to work from.