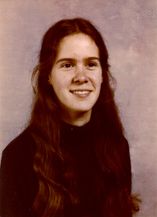 She attended CFS from 1978 until she disappeared her junior year; there was an empty chair for her at the 1984 graduation. Prior to that she had attended Immaculata.

She painted the dragon currently (2006) formerly on the driveway side of the CFS middle school pavilion.