From HypertWiki
< Jenny
Jump to navigation Jump to search 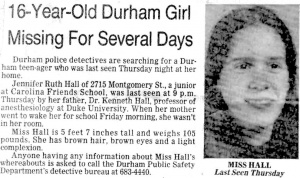 The newspaper article about Jenny's disappearance gives a couple of key details about her final hours, although the headline gets her age wrong.

Two people we know have two sharply different recollections about Jenny's last full day of life. I'm still looking for evidence that might settle the matter; for now; I can only think that parts of each of them are true, maybe even all of both.

I actually spent the day with her before she disappeared. I was taking Jim Henderson's U.S. World Religions course as a middle schooler. Jenny was in the class, and we had gone on a field trip to the Durham mosque, ending up for some reason at our house for tea and discussion. The next day, Jenny wasn't at school. ...

I always wondered if she even went home first from my house, or just walked into the woods right off Cranford Road. I can't imagine they made us go all the way back to CFS that day, but I don't remember how or when she left my house. I do remember she was her usual perceptive, questioning, passionate self that afternoon as we discussed Islam with Jim Henderson. She didn't seem despondent.

The above was a comment on the posting of this picture. There was some additional discussion, but unfortunately I've lost the link to that post.

The newspaper clipping says she "was last seen Thursday at 9pm Thursday by her father [...] When her mother went to wake her for school Friday morning, she wasn't in her room." – so she clearly did go home the night before her disappearance.

She often went for walks early in the morning (up at dawn), but it would be very unlike her not to be back in time for school.

Jenny did go back to school that day. We had a minor set-to as she headed to the bus. She seemed upset, I asked what was wrong, she wouldn't tell me, and ended up screaming at me to leave her alone as she ran (well, stalked briskly) for the bus.

I know memories are largely malleable, but that particular one I relived over and over again for years. I'm inclined to believe it's accurate. The only other possibility would be that my memory is accurate but she did field trip stuff the next day and I didn't see her at all. Which seems convoluted and not the way my guilt remembers it.

The trick would be to find out when she gave her journal to Greg Hunter, which I believe she did on her last day. However, it makes little sense that she would leave a journal, basically a long long suicide note, with someone and then go on a field trip. I'm pretty sure she gave it to Greg that afternoon just before leaving.

The above was in response to Daria's recollection.

Another piece of evidence to look for would be the date of that field trip. Also, J's journal might have entries about either of those incidents (the field trip or the set-to with Erika).

It is apparently not uncommon for someone to perk up dramatically before offing themselves (see especially the comments). (h/t)

I was no longer at CFS by that time, but I almost bicycled out that day (Thursday) to tell her I loved her. I talked myself out of it. (Note to self: don't do that again.)