a selfie Natalie posted on October 25 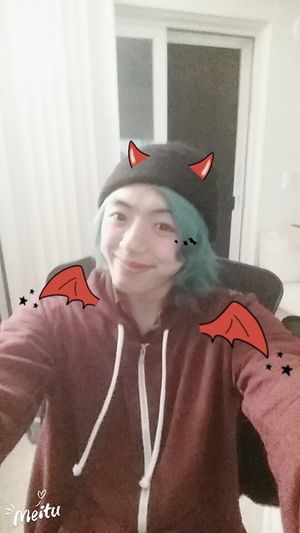 a selfie Natalie posted on October 11

Sometime early this morning, a Vietnamese American Seattle woman named Natalie Nguyen apparently committed suicide by stepping out in front of an oncoming car. She was 22[1].

I never knew her IRL name until this happened; I knew her only as Tipsy Tentacle, a well-liked (and much-loved by many) member of the Mastodon community.

She was reportedly experiencing a lot of emotional pain related to her transition. She was at a party with some friends (some of them also Mastodon people, and at least one of them being someone I'd consider friend-material if I knew her a little better – so not clods; real, supportive people) and apparently that pain just overcame her at some point. (Clarification: As far as I know, harassment wasn't a factor here; I mainly (vaguely) remember her talking about dysphoria and being misgendered... and being breathlessly delighted when gendered correctly, like 'did I even hear that correctly?' I know that feeling so well.)

She left the party saying she was going for a walk. She left a suicide post on Mastodon. And then the police were handing her stuff to the friend, saying "I'm sorry for your loss".

The news is reporting it as a hit-and-run... and also misgendered her initially, but enough Mastodonians yelled at them that they've corrected that error.

[ Aside: This is just one example of what I love about the Mastodon community. Everyone has been hugely supportive and also not afraid to talk about feelings and reaching out and everything. ]

I didn't know her well at all, but I did like her... and she was always just such a fixture. She was one of us. (I wish I had been friends with her, but we only interacted occasionally. I did try to tell her, once, that she had a fabulous smile.) There are several people on Masto that I get worried about from time to time, and she wasn't even one of them. And now she's just gone. I feel like a monstrous claw reached into my safe-space and just grabbed someone at random, and then disappeared into the dark.

And there's basically nothing we can do to stop it from happening again, and again.

On top of that, Ulfra's description of Natalie's last hours is particularly heartbreaking: " I was only cuddling her not, like, 7 hours ago. She helped us clean, she helped us set up the TV stand, she was vibrant, full of life and love. But she was hiding so much pain."

People have been boosting her old messages all day:

9/16 "if my existence makes random people on the internet happier, then i did good in this world."

Several Mastodon instances even put her in their X-Clacks headers, to keep her memory alive.

And then there's another twist – for me personally, anyway.

As many of you probably are aware, my friend-and-savior Jenny killed herself some 34+ years ago – and as part of trying to get my head straightened out and work towards finding a way to be basically okay with life (which was simply not possible before transition), I've been rereading all the notes she sent me over the course of our all-too-brief friendship, and writing up my thoughts on them.

In one note I had come across but not written up yet, she describes the collection of pharmaceuticals she had put together for when she was "ready", and ultimately did use to take her own life about a year and a half later.

I had to go hunting for that note, because although I've scanned all the notes in I hadn't done anything with that one yet – and it was only when I found it again that I realized I received it on today's date. (It was also just 2 days past her 16th birthday.)

Just reading Jenny's note, and thinking about how she kept saying she was cold... and then thinking about Natalie and how she must have felt as she walked out of that party... and how Jenny reportedly acted on her last day (apparently lively and engaged for most of it)...

And then I start thinking about feeling alone at parties with good friends.

There was this one occasion when J and I were the lone holdouts who didn't want to go into the roller-skating rink with the rest of the upper school but were told we had to. It was after she had unfriended me – so after going in the door together, we separated. She went off and hung out with her friends (some of them also former friends of mine) and I tried fruitlessly for awhile, in my high-functioning-autistic kind of way, to interact with the crowd of highly kinetic, excited teenagers while surrounded by loud music and people talking loudly... and at some point I realized how hopeless it was, and I could feel myself falling apart inside... and I went off and hid behind a row of lockers and totally lost it, collapsing into uncontrollable tears.

I have to wonder if Natalie felt that way, at that party. Too much loud, too little connection. But I don't know anyone else who experiences a reaction like this, cis or trans.

So I'm feeling very uncomfortable right now, and have been all day. Strangely, I don't feel depressed, exactly; more angry and desolate.

I feel like a caged animal – restless. I feel like I can't breathe – sort of a low-level panic attack (not escalating, fortunately). Maybe it's the tribal defense mechanism kicking in: I need to go out and slay the beast that so easily killed one of us, and am prepared to die in the attempt. I feel vaguely responsible – preventing more sweet, lovable people from offing themselves has been squarely in my wheelhouse for 34+ years now – and am trying not to feel that way because I know some things are just out of my control, and this is one of them.

I'm okay, though – for certain values of okay.

I mean, this has just kind of solidified the feeling that I will never really feel okay. The feeling emerging from all the Jenny-analysis is that although there are people who truly love me, it will never be enough, nobody will ever love me back the way I want/need to be loved, nobody will feel about me the way Jenny and I felt (during the height of our friendship) about each other. That was a once-in-a-lifetime thing, and it's gone. (That word is resonating in my head right now.)

...and that (needing this unusual super-intense kind of interaction) is my brokenness, not anyone else's. It's just what I have to deal with, and I'm hoping somehow I will find a way for it to be tolerable -- but I can't see it ever being okay.

...but I'm not in any actual danger, as far as I can tell. I don't even think I'll have trouble sleeping. I may well be sobbing on Harena's shoulder a bit, but that's not vastly unusual.

Where's a group of Klingons when you need one?

The problem is when you've been feeling unworthy for so long, and chalked your unhappiness up to not deserving better (which at least gives you something to work towards) -- and then, due in no small part to your hard work, you start to feel like you do deserve it, but it's still not happening... what do you do?

Rationally, I know I'm worthy, and I'm slowly coming to feel more of a gut-level confidence in that.

Rationally, I also know there are people who love me; the problem is how to feel like this is true, rather than feeling kind of sad, empty, and alone in my head... especially when something like this (Natalie) happens and I urgently need an extra dose of positive feeling to remind myself why I bother to breathe.

I'm trying to get used to the idea of deserving and needing something while still not seeing any way for it to happen.

Am I going to be accosted today for not passing well enough?

funerals are so sad ):

a long time ago, in first grade, this white boy said i came from a long line of vietnamese farmers
what the fuck
that isn't even remotely correct. my family had the privilege of being middle class small-business owners. the authoritarian communists didn't take kindly to them.

date idea: talking to your crush via an ouija board because they're a cute ghost girl

when can i upload myself into a computer so i can stop having a body.

[CW: trans stuff, parental rejection]
parents: grow up and go to college and then you can be anything you want.
*goes off to college and becomes a girl*
parents: no, not like that.