As pretty much everyone who is both in North Carolina and not living in a cave is now aware, our esteemed "conservatives" are currently trying to pass a law amending the state Constitution to make gay marriage even more illegal than it already is -- because of course if you don't make it illegal enough, you never know what those gays might do. In our part of the state, the political posters advocating against this change have so far heavily outnumbered the signs in favor -- which apparently didn't sit right with someone. Rather than putting up their own sign, however, they bought a can of black spray paint...

...and did this to the two signs at the intersection of Cornwallis and NC 751: 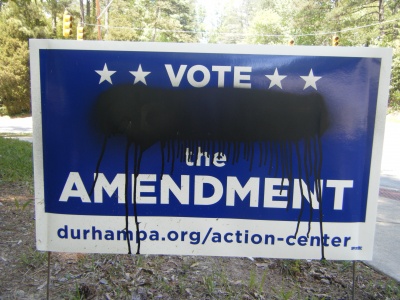 I had previously seen a couple of "Vote FOR Amendment One" signs popping up at the other end of Cornwallis (where it crosses Murphy School and changes into Mount Hermon) and wanted to put up a small sign next to each one saying something like "or, actually, DON'T", but I didn't get around to it... and then those signs mysteriously disappeared. (...from which we conclude that the signs were put up by a drive-through, and one or more neighborhood residents disagreed.)

So then when the above happened within two blocks of my house, near the corner of the street I grew up on, it felt kind of personal.

So Harena and I went out and did this (to both signs, front and back of each): 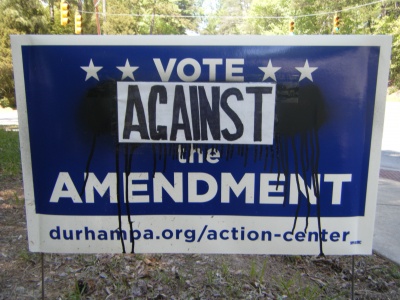 (There's one more vandalized sign at the base of 751, just before 15-501... we will get to that one when we can, if someone else doesn't fix it first. There was another one a couple of blocks away, but it had been removed as of this afternoon.)