The argument seems to be that when the economy is tough, we should spend less money. Therefore Obamacare -- which must be expensive, right? -- is something we can't afford right now. This argument is based on several bits of misinformation and misperception, the most obvious of which is that Obamacare is expensive and will increase the deficit. 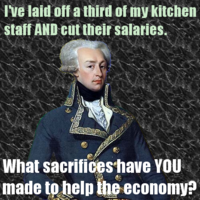 The Congressional Budget Office (CBO) estimated the legislation would reduce the deficit by $143 billion over the first decade and by $1.2 trillion in the second decade.

Even assuming that the CBO estimate is somehow inaccurate, if the GOP would just be willing to reinstate Reagan-era tax rates for those who can afford a little extra -- you know, that top 1% of earners who just got their tax cuts extended by that "socialist", Obama -- any possible underestimate of the cost would be taken care of.

The CBO analysis doesn't even take into account the expected economic benefits from having a healthier population -- a kind of "trickle down" that actually works, unlike the Bush tax cuts.

Even if your sole interest is seeing the insurance companies profit, Obamacare fills that need too: Forbes magazine has observed that insurance companies are seeing a boom in new policies, including many from small businesses which previously hadn't been able to offer insurance to their employees.

Gee, large and small businesses benefiting -- isn't that what Republicans are supposed to be in favor of?

Addendum #2 -- a little bit about how this affects me:

1. I had an esophageal blockage back in November 2009. It wasn't immediately life-threatening, but I couldn't swallow anything -- solid or liquid -- so I had to go to the emergency room (I tried a walk-in clinic first; they sent me to the emergency room), where they knocked me out and removed the blockage endoscopically. The final bill was nearly $8000. Since I don't have any insurance, the hospital (which mostly did a fabulous job) has only been paid a small fraction of what they are owed -- and I get phone calls from creditors every week (and my credit is trashed, but no big loss there).

I can't afford insurance because the work I'm doing right now -- despite being absolutely the hardest work I've ever done -- doesn't pay well when it pays at all, and doesn't come with any "benefits".

2. What I was doing essentially time-and-a-half in 2009 was helping to take care of Josh and trying to get proper care for him. The mental healthcare system is so incredibly broken that even though we first got him "in the system" for services in 2003, it wasn't until 2007 (after many failed attempts) that we finally we were able to get him back in the system, and he didn't start getting actual services until 2008 -- 5 years later.

The services Josh could receive kept getting cut after that, too, so we spent a lot of time just trying (futilely) to maintain those services -- time we could have spent trying to find him better services and a permanent home.

It wasn't until 2009 that we got him on Medicaid, which pays for the therapy and residential services he is currently receiving. It wasn't until 2010 that we could finally get him some proper care and get him out of the house so I could do more productive work -- when I'm not fighting the bureaucracy to (a) keep that funding in place and (b) find information about group homes for him to move into when he is done with the therapy.

If Obamacare had been in full effect in 2003, or even in 2009, there wouldn't have been any question that Josh was entitled to Medicaid, and I wouldn't have been worrying about creditors coming after me to pay for a life-saving operation.

If Josh had been cared for properly from the moment we first started trying to get care for him, we would have had time to be more productive and would probably be steadily employed now in a "proper job" with insurance. If he had been properly cared for from the day he was first diagnosed (at age 4), he might be a productive member of society by now.

As a country, we can't afford not to have Obamacare, at a bare minimum. Most wealthy/Western countries have much better healthcare than we do, and this is a (small) step towards the systems they use. Why is there even a debate about this?