The CFS Pavilion Mural was painted as a "mini-session" project in 1982 (1981? 1983?) by a small group of Carolina Friends School Upper School students. The group included:

It was done for a mini-session project in 1982 (possibly 1981). I thought we were going to come back later and finish it... (I think the supervising teacher's name was Ellen, who taught art at CFS, but I'm not quite sure; I need to rifle through old yearbooks).

2007-06-18 Update: the mural finally got painted over for real; the whole "Quakerdome" is now a uniform beige. I'm kind of sad that nobody saw fit to warn us, so we could get any last photos (I didn't think to take an overall photo, as I was concentrating on the details). (When I mentioned this on FaceBook, someone at CFS sent us prints of some better photos of the mural; I need to scan those in.)

2010-04-02 As pointed out by John Ladd on the Quakerdome Facebook group, there is an article about the mural on the CFS Alumni web site. The article didn't make it to the new alumni web site. 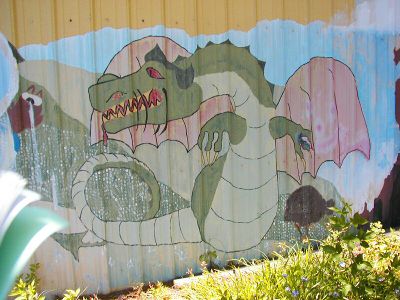 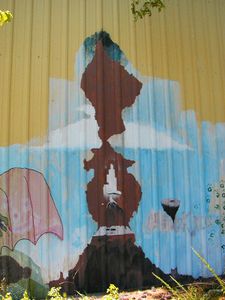