I'll put my comments in with the pages.

Jenny is reacting here to an incident in which she and I had agreed to meet at Egypt but my parents really wanted me to go somewhere with them and wouldn't take no for an answer until I explained that I had planned to meet with Jenny. "Prior commitments" being sacrosanct, this was an acceptable justification, where just {me not wanting to go} had not been.) Up to that point, neither of us had told anyone else that we were meeting, and we were a bit worried about how parents would react (mainly hers, though).

This eventually led to the idea of me inviting J over to do homework together after school, which I think is discussed in a later note.

Now that I have gotten myself together what do I write? Okay, if you discover that you have a conflict with a scheduled meeting in the future, don't worry about showing – I won't mind. If I, at any time, am not able to make it I will try and leave a note. If I don't show in the first half hour, don't bother hanging around.

Sorry for my incoherent, broken, digressive spreche (talking). My mind was not working properly (I think you do that to me.) Every time I spoke – I seemed to get messed-up. I think my associative thinking was on the blink. When you mentioned dreams I remembered that I had specific thoughts on them but I couldn't remember what the thoughts were. My mind was shrouded in a fog. "My mind is distracted and confused..." and I was confused. Argh! I hate it when I can't think. Then I can't talk.

What happened between Page One and Page Two is that they all showed up at my house. This happened several times, and I'm trying to remember the exact order -- but I think this first time, J threw pebbles at my window until I peeked out. (It took me awhile to realize that the noise wasn't just random stuff falling from the trees.) I remember it being dark, but that might have been a later time. Here are the bits I remember from various visits (there were at least three):

Well, we sure surprised you!

You see, Cindy was over at my house to pick up some Latin. And we drank Coca-cola and generally talked for a while. And then lo and behold Cindy had to be moving right along [graphic looking something like an EKG chart]

And so we walked in the opposite direction of the sunset and there was McDowell. "Let's go bug Nick!" so we flipped a piano – I mean a key. The rest is history. Heh, heh!

Hello, its me again. I'm really going wild finding bits of scrap paper to write on. E.K.G. paper is great to use for origami – it's thin enough and very colorful! I made some birds out of this and made a mobile for my dad. If I remember I'll ask him to tell me again what each color is....

Do you mind us barging in on you like that? It was very nice I think. It was more relaxed – because Cindy was there – so there were no "Implications". Also it wasn't planned – could this be a factor?

Also your room was very "busy" and I am always comfortable in such an environment. There is nothing more that I can't stand than a room where everything is so neat that it is bare... there's nothing to look at or occupy your mind with.

I think the idea of writing things on the back of used pieces of paper was something she picked up from me; my dad used to bring home stacks of unused printouts (I still have some of them), and I would often use those to write notes on rather than wasting brand-new sheets. I tended to feel that what was on the other side of the page would sometimes provide a kind of sideways view into my life – "this is the stuff I'm surrounded by". It certainly worked that way here, as I got much more of a glimpse into Jenny's life than plain paper would have provided.

I always enjoyed the feeling that friends might show up at any time, unnannounced; I know that a lot of people (some of whom I am close with) feel pretty much the opposite.

"busy": Some people would have said "messy". <shifty-eyes> (I'm kinda sad now that there are no photos of my room at McDowell. It was generally very, uh, busy.) 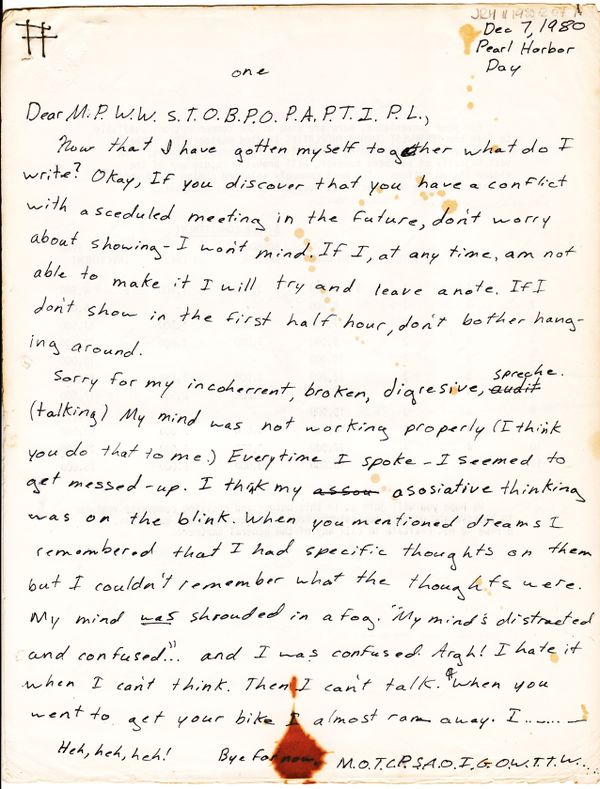 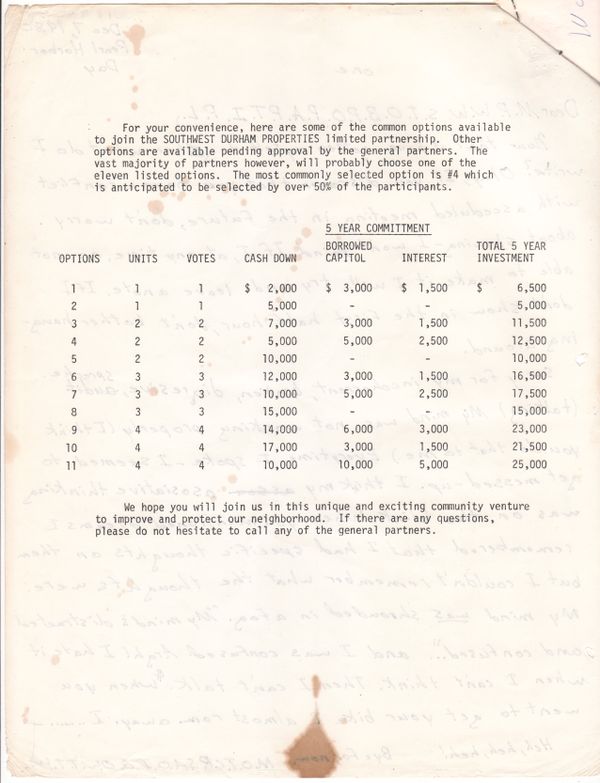 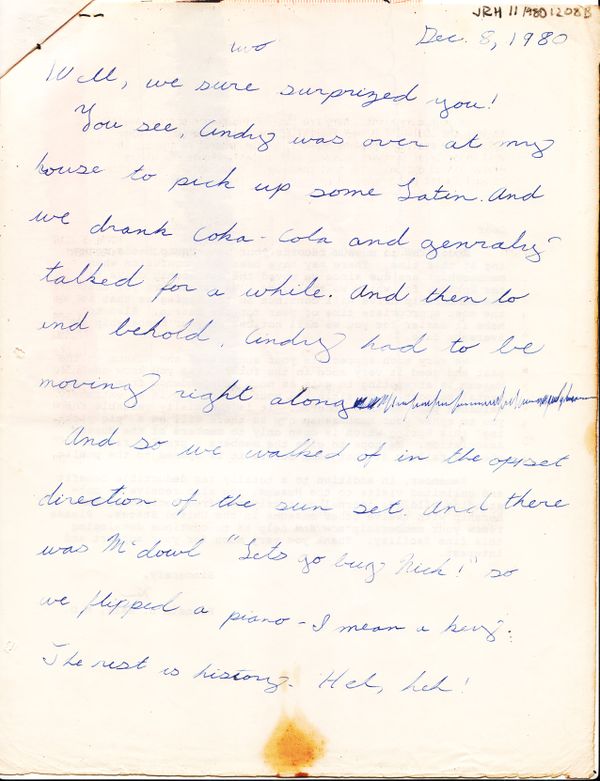 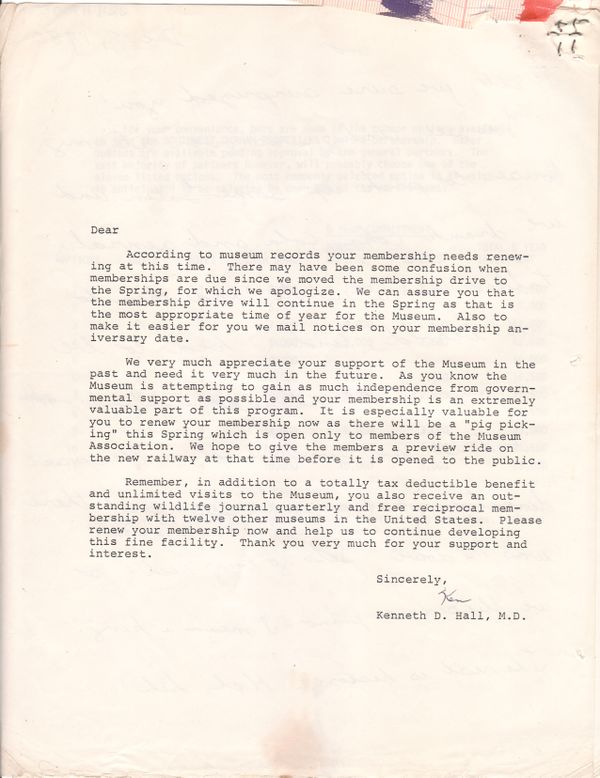 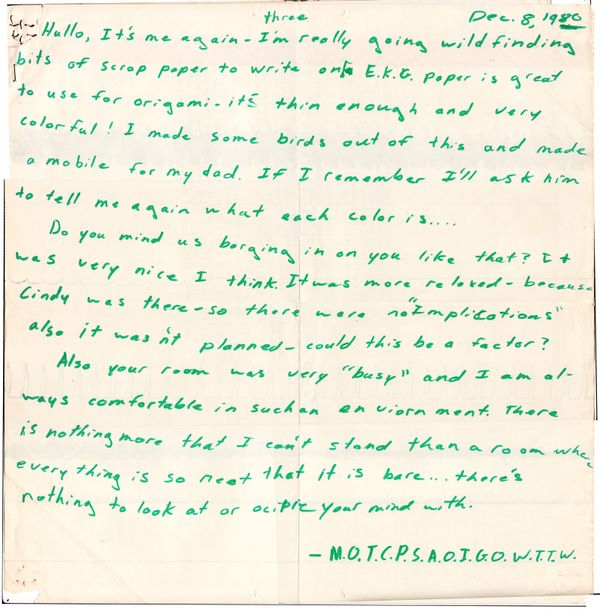 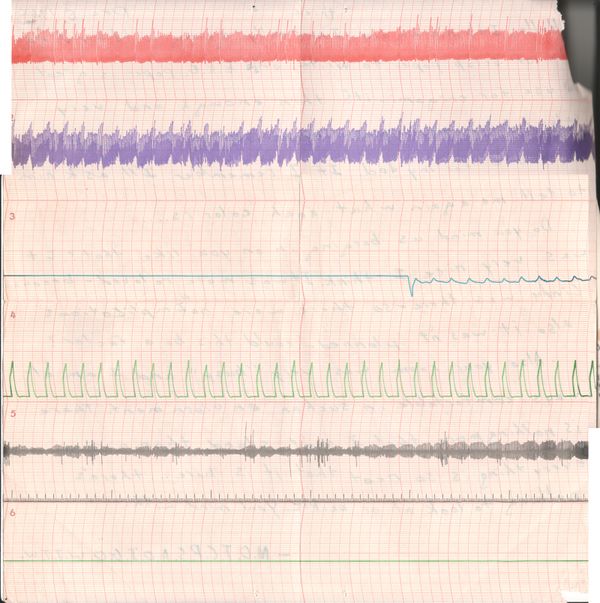