I can see this comment, but FB won't let me reply to it directly -- it was made visible to me when a friend (FB and RL) made her own comment on the link which started the conversation. I couldn't let it go unanswered.

The comments were in a thread on photos of the abandoned Six Flags New Orleans amusement park:

I went to New Orleans after the hurricane and couldn't help but realize how stupid people would ever want to build a city that's lower than not only sea level, but even some inland rivers too. But, you can't fix stupid. The place smelled like a sour milk sponge.

And then they tried politicizing the disaster by claiming it was all Bush's fault, blamed government for their stupidity for living there. What a joke.

Since this isn't Facebook, I feel free to say this: YOU ASSHOLE. 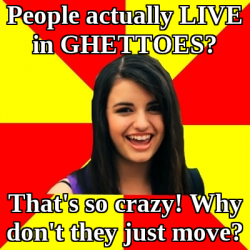 They didn't "try to blame Bush for their stupidity for living there". They blamed the Bush administration for:

I'm sure you're a loyal Fox viewer and therefore these facts won't change your rigidly "fair"-and-"balanced" ("fair": Foxspeak for "favoring insane right-wing ideology", "balanced": Foxspeak for "making sure every sane or reasoned viewpoint is countered with insane right-wing rhetoric") view of the world, but I couldn't let your words stand without comment. Yes, Bush and his policies were very much to blame for the extent of this disaster.

How dare you try to shift blame from those responsible to those who were the victims of that incompetence?