From HypertWiki
< Pip
Jump to navigation Jump to search

Pip had been getting skinnier over the past months, verging on skeletal for the past few weeks, and we were planning to make a vet appointment as soon as current crises (mainly the procurement of Daisy, and B&Z's spring break) had passed -- but on March 6, B&Z noticed that he was breathing heavily, through his mouth. 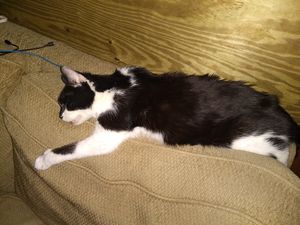 Pip panting on the back of the TV couch

Woozle [7:43 PM]: Pip seems in worse shape tonight. :-(
Harena [7:43 PM]: yeah :'(
Woozle [7:44 PM]: ...but he's still responding to strokes, and purring. He looked like he was dying for awhile, tho.
Harena [7:44 PM]: labored breathing, sometimes through his mouth.. i vaguely recall the vet saying that was signs of heart failure but i'm not sure if i'm remembering that correctly or not

Harena posted at 8:06 PM on Mastodon: "Feeling very sad right now. Pip seems to be on his way out and we are not going to be able to even think about getting him to the vet till after Monday at the earliest[...]"

That night, B & Z woke us up around 11:30pm to say they'd noticed him bleeding from the mouth.

Harena posted at 7:06 AM on Mastodon:

As of this morning, @Pip still lives.

His breathing continues to be labored & I marvel at his remarkable capability of looking like he's at death's door and then just snoozles there for a while instead of passing through.

He doesn't appear to be interested in food, though. :(

Pip's condition has been worsening for some weeks but numerous conflicts and obligations have made it very difficult to know when we could bring him in; we were hoping to finally make an appointment next week.

He seems to have gotten noticeably worse over the past few days, though, and we thought we should check with you in case you had any advice.

It looks like he is experiencing the heart failure you warned us might be coming -- he's been breathing heavily, sometimes with his mouth open. He's still awake and alert, responding and purring when stroked, but does not seem happy.

At this point we cannot afford any heroic measures, but perhaps there is some affordable form of treatment for this? Or at least something to help him be more comfortable for the remainder of his decline.

Thank you in advance for any thoughts you might have. 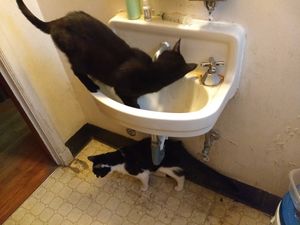 Kestra on the sink, Pip underneath 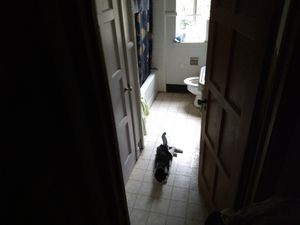 Pip decided around this time that he needed to sequester himself from the rest of the herd, and started spending most of his down-time in the upstairs bathroom.

(from Woozle, on Sandy's behalf)

Pip's condition has been worsening for some weeks; he took a more abrupt turn for the worse two nights ago and we're now pretty sure he's at death's door. His breathing is labored, and he was bleeding from the mouth a bit last night. This seems to have stopped this morning, and he has remained awake and moving throughout (he has continued to drink from his usual water fountain, though he has stopped eating; he also joined us on the couch last night to watch TV, as he usually does).

At this point we're not sure how to proceed. The earliest we could make a regular appointment for him would be next week. We cannot afford any heroic measures, and don't know whether it would be best to bring him in for euthanasia or to let him die naturally. We can only think that he must be suffering to some degree.

We would appreciate any advice you might have to offer. If we were to euthanize, is that a service you offer? Would we just bring him in, or do we need an appointment.

(We sent an email about this to Dr. Doyle Thursday morning, but got no reply.)

I am very sorry to hear about Pip’s condition. I have forwarded this email to Dr Doyle and asked that he give you a call to discuss all of your options. He should be reaching out to you today. Let me know if there is anything else I can do.

He's been upstairs in the upstairs bathroom mostly, since last report. He attempted to hop in the tub last night and probably would have succeeded on his own but I lifted him up and put him there, and then ran the water for him and he was able to drink a little (he seems to find drinking impossible now if he has to lean downwards, due to fluid getting in the way of breathing). He seems to have spent the night in the bathroom, and this morning we repeated the tub process.

He has hopped out on his own, each time, while I was brushing my teeth -- and it sounds painful when he lands outside the tub, but he recovers quickly. This morning he was clearly having a bit of extra difficulty breathing after hopping out, and made a pathetic meow... coughed up a tiny bit, then recovered. He didn't come downstairs when I did.

There's a weight on me this morning.... in a few hours we take @Pip in for euthanasia. And although this will ultimately bring relief to all of us, especially him... there will be a gaping dogboy hole in this house afterwards.

For all my complaining about him, I will miss him :'(

The vet confirmed that this was something he could not fix -- something preventing the lungs from working properly, and Pip was having to use his stomach muscles to keep breathing (for three days, ye gods).

After being injected up on the table, I lowered him to the floor. He walked over to the chair-underside where he had been hanging out mostly, stumbling a bit as he tried to get situated. He continued breathing for a few more minutes -- maybe a dozen breaths, taking a little longer each time to let the breath out. Then he stopped for about 15 seconds... then his breathing spasmed once or twice, a few seconds apart...

By 10:00, he had stopped breathing completely, no movement.

The vet came in about 10 minutes later, put a stethoscope to Pip's chest and confirmed that he was gone.

Harena wrote on Mastodon at 10:46: "Just got back from the vet. @woozle is out back digging @Pip's grave."