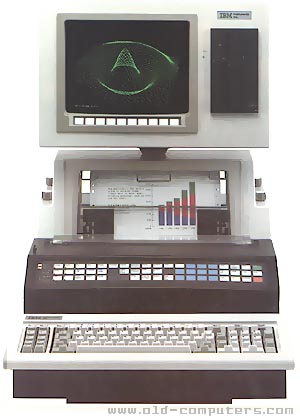 The CS-9000 (or S9000; it went by a number of different names) was a disused computer from my dad's lab. I remember using it at Governor Street, so I probably got it in 1986 or 7, when I took it up to Providence and used it for a bit of word processing and coding, including an early version of kscope.exe using the Pascal compiler which came with it, and probably some letters which would have been nice to have later on, but oh well.

Made in 1982[1], it had a megabyte of RAM (years before "640k should be enough for anyone"), a monochrome graphics screen, a color dot-matrix printer, and 8-inch floppy disks. By the time I received it, the monitor stand was missing, so the monitor had to sit by the side of the main unit.

I'm pretty sure I still have the original keyboard and 8-inch floppies, and possibly also the monitor; will photograph the next time I come across them.

The main unit (which included the CPU and printer) was lost in the The Great Trailer Fiasco of 2003.

It was originally introduced as the IBM Instruments Computer System Model 9000 in May 1982. Its long name led to it being referred to as the Computer System 9000, CS-9000, CS/9000, or CS9000. Originally, the CS9000 was available for scientific instrument users; it was not offered to customers who wanted to use it for other purposes. The CS9000 was unsuccessful in this niche; the cheaper IBM Personal Computer was adequate for many instrumentation tasks, [while] IBM's larger general-purpose computers were used for more demanding tasks.

There are some more stock photos in the Byte Magazine archive.

Also, Vintage Computing has a scan of a brochure.