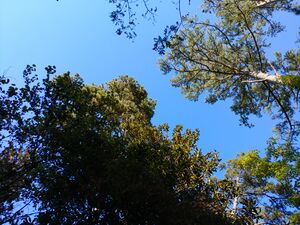 Got out the electric chainsaw to try to finally slice up the giant pine tree that fell in the side yard a decade or so ago, blocking access for mowing (which in this context is more about clearing out wisteria and other invasive stuff than it is about lawn/grass) -- but we seem to be out of chainsaw lube. The chainsaw has none in it (probably ran it dry last time I used it, which was probably several years ago at least).

Accessing the chainsaw required clearing out the attached storage shed, because all the intertwangled bicycles in there made it absolutely impossible to access the back end where the chainsaw is kept. So, having pulled out all four bikes (four? When did we get four? Three of them I knew about, and I remember where/why we got them, but that last one I don't even really recognize. I have a vague memory of someone saying "want a free bike?" and we snagged it, but I don't remember quite when or why.)

This seemed like a good time to try to reorganize stuff -- anything that wasn't intended for outdoor use should probably not be taking up space in the shed, and things that are only used once a year should also probably not be taking up space... so I moved some lawn chairs (only used for beach trips) and holiday decorations up to the small attic....

Moving stuff out of the shed

At some point, we managed to get out to the hardware store and got some lube. (It was hard to find -- the app said it was in with the automotive fluids, but actually no, it was in the area where the chainsaws and other outdoor equipment is).

Moving stuff back into the shed 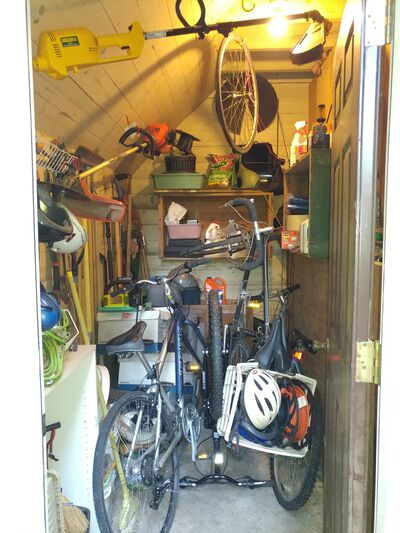 During the process of trying to rearrange stuff better (specifically, trying to set up a hook-lift system so I could store all the bicycles vertically and off the floor -- which didn't work because I really need a pulley and some thicker cord than the string I had on hand), I knocked a container of bottles on the ground and... oh hey, here's the chain lube... okay, so now we have two large bottles. At least we won't run out suddenly.

I was regretting not having taken a "before" shot, but the "after" (pictured) isn't a whole lot better. At least I can kinda get to the back, now? Sorta?