This is a sequel to the events of August 21, in which we failed to correctly understand the eligibility requirements for the Work Program and consequently were given a pre-addressed, prepaid envelope for mailing the missing documentation to Warren Wilson's Work Program office. 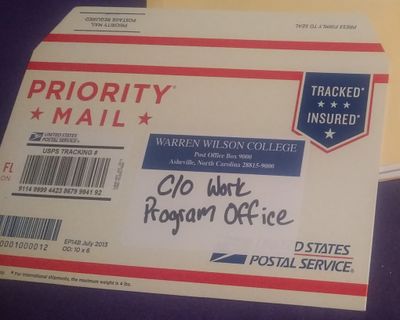 This is the package as it was mailed.

Unfortunately, between (a) us being extremely frazzled after having spent a frantic week in Asheville shopping for various needed items and solving technical problems with two different mobile phones, (b) nobody mentioning that we should be sure to add a return address to the envelope, (c) there not being any obvious blank spot where a return address would go, and (d) the address being prepaid so that I didn't go through the usual processes I go through in mailing a package, I neglected to put a return address on the envelope.

I realized this only after it had been picked up from our mailbox, of course.

I signed up for email notification of tracking events, so we would know right away when there was any change in the package's status.

Our expectations of the package's delivery were delayed somewhat by Labor Day followed by a hurricane, so we didn't really start to worry until September 6 (Thursday), at which point it was last seen in transit on September 2 (Sunday).

On September 10 (Monday), I filed a "Where Is My Package" request online with the USPS. (They emailed an acknowledgement, but never sent any actual information.)

On September 12 (Wednesday), we did an all-day round-trip to Warren Wilson to personally present Benjamin's social security card to the WWC Work Program office. This was handled efficiently and pleasantly.

On September 24 (Monday), Benjamin noticed there had been an update on September 19 (Wednesday) saying that they were unable to deliver the package because of a problem with the address.

We therefore had a friend (FrozenTrout) call the Post Office to try to find out how we could get the package back. At first they said it was at the Mail Recovery Unit (MRU) in Atlanta, and there's no way to contact the MRU, so we need to talk to the PO from which it was mailed. They also said we had to file a missing mail report, which I had already done (on the 10th).

I also tried to do a Package Intercept, but it said the package was "ineligible".

On September 25 (Tuesday), we went in person to the USPS location that handles our mail delivery and asked them. They said they couldn't do anything about it, and we needed to file a Package Intercept. I told them I had already tried that and the site said it was "ineligible"; they seemed baffled by this, but reiterated that they could not issue a retrieval request and we needed to call the PO location that actually had the package.

That being the MRU, which cannot be contacted by the public, it appears that there is now absolutely no way to retrieve the package, and it is probably in the Dead Letter Office (if, indeed, MRU is not a euphemism for this).

We will simply have to obtain a new birth certificate.

I should note that I've used the USPS heavily for decades, both commercially and privately, and this is the first time I've ever had a real problem with them.

The package probably would not have been lost if it had had a return address – but it's not at all clear why the package could not be delivered in the first place. The only theory that makes sense is that the address label somehow became damaged beyond legibility.

A theory that doesn't make sense is that someone got confused and thought the top part of the label (the white-on-blue text headed with "WARREN WILSON COLLEGE" was the return address and that "c/o Work Program Office" was the entirety of the destination address – and either nobody else was brought in to double-check this, or nobody who checked it realized that the top part was the address. This seems very unlikely.

Multiple mistakes were made by the USPS, in any case:

In Transit to Next Facility