Remember when used to sit back and admire our lovely hardwood forests -- and then the wisteria salesman talked us into leveraging our assets with accelerated growth through diversification?

The way it used to be was this: every now and then a tree would die from old age or lightning and we could either harvest it for the wood or let it lie to feed bugs that feed birds that help spread seeds around and promote a healthy ecosystem yadda yadda. It wasn't very exciting or dynamic -- really, it was about as exciting as watching trees grow -- but it was stable and pleasant to walk in. 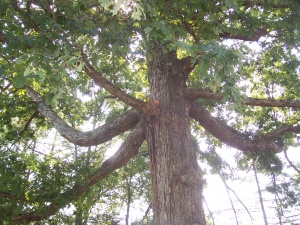 Then one day we were approached by this guy who said he was sad to see how terribly stagnant our forest was. What do you mean?, we asked. Because there's hardly any growth, he said. "What's your favorite tree in the forest? Maybe this oak here? Do you have any idea what a waste of space this oak is?"

We were a bit baffled, until he explained how slowly the oak grows -- maybe a few inches a year -- and that we could be using the same land for wisteria, which can grow... well, let's just say "a lot faster" and leave it at that. He painted a picture of a dynamic, flowering, rapidly-changing forest that was a treat for the senses, and we thought hey, what's the risk? Either it works or it doesn't, and we could end up greatly expanding and diversifying our botanical holdings, giving us a much more solid position.

We began to get alarmed when we noticed that some of the trees weren't doing so well anymore. Some of them died, and some of those fell over. The wisteria didn't seem to mind; a fallen tree is just free transportation to a new area of the forest.

We decided that the wisteria had to go, no matter how pretty it might be; if we let it continue, pretty soon there would be nothing left but an impenetrable tangle of wisteria vines.

So we started the laborious task of cutting the stuff down and rooting it out of the ground -- and believe me, that stuff is insidious. You start pulling one vine's roots out, and it crosses under the roots of six other vines, whose roots cross under still other vine roots... a nice little buddy-buddy system where every plant helps defend the others from being completely rooted out -- and it doesn't take much root for a plant to resprout after you think you've removed it. And if you think you've got the stuff out, you'd better come back and check it again in two weeks, because it will probably be back.

Nonetheless, we were making progress on this -- large parts of the forest were now visible again through the tangle of dying wisteria leaves, and we were seeing encouraging signs of recovery from the now-threadbare trees that had recently been all but completely covered with wisteria tangle...

...and that's when the guy from the US Chamber of Growth showed up, and told us to stop.

"But it's killing the trees!", we objected. 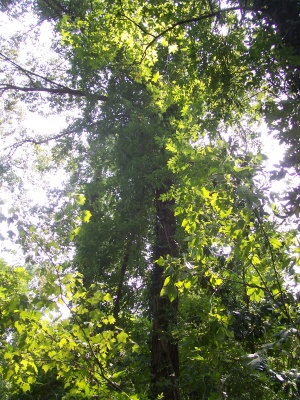 "Growth is good," we were told, and the business model of slow-growing trees was simply obsolete; the amazing success of the wisteria vine, having come to dominate the forest in just a few short years, was clearly a testament to this. Why would we want to unfairly prop up an inferior species at the expense of another that was obviously so much more successful? Look at how innovative and resilient the wisteria is -- it forms root networks to protect itself! It leverages your existing infrastructure to rapidly expand its operations! It exports off-trunk to find new markets! 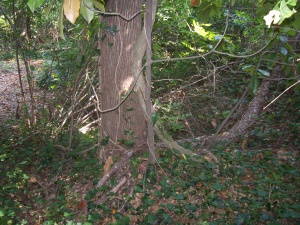 wisteria, positioned for a hostile takeover of an inferior operation (the large snaky thing behind the spindly magnolia is wisteria; so is the thin vine spiraling up the magnolia).

"Because trees are pretty and they give us wood?", we suggested.

"Ah yes, but think of how much more wood you'll get, with the wisteria accelerating the process!"

Then he took us down to a spot where a particularly large old poplar tree was covered over with wisteria, forming a tent-like space underneath that was peaceful and cool. Really, I wanted to just sit there all afternoon. "And look at this -- you can't tell me the wisteria isn't beautiful!"

With reluctance, we explained how this was a transient beauty; the tree would die and fall over, and the tent space would be gone. Maybe other tent-spaces would be created under other trees, but at the rate the wisteria was going, it was going to run out of trees before long.

"Yes, but don't you see -- this is survival of the fittest -- this is what makes America great! If you prop up the weak at the expense of the strong, you're promoting socialism! You're encouraging stagnation and decay!" He started ranting against artificial barriers to growth, regulatory forest interventionism, and Keynsian economics, and I think at that point I kind of lost what he was getting at, and told him politely to leave.

He did, but that wasn't the end of it.

The next day we went out to start cutting vines, there was a lawyer blocking our way with a cease-and-desist order. "These vines are the intellectual property of my client, Forest Cultivation Industries, Inc., and as such if you destroy them you are guilty of theft, piracy, and violation of a living organism's natural right to exist."

Theft? "Taking the fruit of my client's intellectual property and using it for your own purposes, to wit: large piles of brush, without license."

Piracy? "Depriving my client of licensing fees from the use of his intellectual property."

Natural right to exist? We suggested that if there were any such thing, then possibly the trees also had it, and that his client's property was depriving them of it -- but that didn't wash: "Only nature has the right to make that decision. Human intervention only leads to weakness and degradation. Central planning can never be as efficient as free and open competition in the biological marketplace. The invisible hand of the market will show us the path to a righteous forest. Central control leads to coercion and Nazis coming into my yard stomping on anything they don't like. That's what you want, isn't it."

Well naturally, we told this guy to get stuffed... and next thing we knew, we were being surrounded by Sheriff's deputies and told to put down our weapons of mass destruction and raise our hands high if we didn't want to get hurt.

Weapons of mass destruction? Apparently they were talking about our gardening tools -- the hand-shears, the loppers, the hand-saw, and of course most incriminating of all the gas-powered circular-saw bushwhacker -- which we were using to destroy the mass of vines that was still trying to take over the forest.

We put down the tools and, another long story short, managed to get away with only a small fine and 30 days of community service -- pulling weeds from the landscaping of Forest Cultivation Industries, Inc.

In closing, all I can say is this: if you're going up against wisteria, know what you're dealing with. Wisteria has connections, and it fights dirty.