So many things went wrong, dropping Benjamin off at Warren Wilson; it's a struggle even to remember all the major ones.

Spoiler: he's all moved in and stuff, with only annoyance-level obstacles left to deal with.

(See also: the previous day for travel to & arrival in Asheville)

Since learner's permits for B & Z ended up not happening over the summer, we really needed to get B a picture ID, kind of at the last minute -- which is what gave rise to half a day of panic when we could find neither his birth certificate nor his Social Security card and the minimal circumstantial evidence available suggested they were last in my care (they were, in fact, in Harena's lockbox), followed by another half a day standing in line at the DMV a couple of days later, last week or so.

I had what Harena would call a "weenie burger" that we should bring the documents we had used to establish his identity for the DMV, even though the whole point of that exercise was to make it unnecessary to bring them, because what if I had misunderstood the documentation requirements for WW registration.

...but we decided to play it safe by leaving them, rather than risk losing track of them again.

It was also during this week that we seemed to acquire an Electronic Device Curse. Benjamin's mouse became erratic and then, after changing the battery, died completely. My mouse was working fine when I left it one Sunday morning, and then when I came back some minutes later was completely unresponsive. My smartwatch mysteriously died overnight, and no efforts at revival have produced the least sign of life. (At least it was free; easy come, easy go.) The upstairs toilet started leaking, too, but there was no time to arrange a plumber visit (or certainty of being able to pay for that).

So I suppose the events that followed our arrival in Asheville should not have come as any surprise, following the pattern as they did.

Lacking time to have our usual breakfast at Waffle House, we had to settle for making use of Quality Inn's low-quality breakfast buffet. Benjamin was not happy about this, but went along with it... and almost immediately started feeling nauseous.

On the plus side, Warren Wilson's new-ish president had completely revamped the new-student arrival process from when we last experienced it in 2015. There were multiple teams of helper-students at every corner, multiple parking locations, and other rearrangements.

It was kind of a perfect storm of timing and aim. We couldn't pull over for him to get out. We didn't have access to any plastic bags yet (we'd forgotten to bring them and hadn't yet obtained any). The first salvo went inside; I told him to try to aim out the window, which he did -- and a bunch of it got inside the window slot as well. (At least it didn't smell of anything much except food. Not even partly-digested food; just food.)

Finally, we got across the street and pulled up in front of the dorm, where we were approached by a helper-student from whom we were able to requisition cleaning supplies. I escorted B to a shower so he could clean himself off and change clothes.

Somewhere in all that, we were asked what room he was in, and we didn't know; it turned out we were supposed to have gone somewhere else to get a key first. When asked whether I would rather go get a key or clean up the barf, I said the latter -- partly because I thought that getting the key required doing the full sign-in, because that's how it had worked in 2015, and I was dreading that because of all the uncertainties around B's paperwork.

A helper-student said she would go off and get a key, but then time went by and she wasn't heard from again, so Z volunteered to go with B to get the key; I handed him the paperwork folder and explained the situation quickly, and off they went.

I got the car reasonably well cleaned up; B & Z reappeared with a key, and we finally got him moved in (me unloading stuff from the car to the sidewalk, and them taking it in). 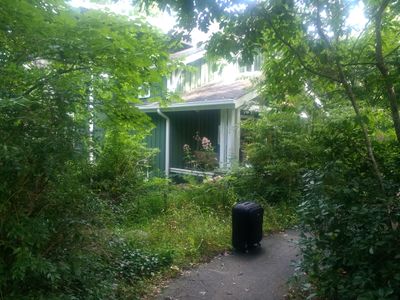 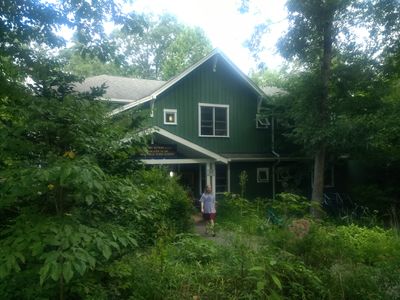 ...so then we parked the car in a more permanent location and walked from Sutton dorm over to Cannon, which turned out to be in the same building as Gladfelter (the main cafeteria).

It turned out that we should in fact have brought the identity documentation because I had in fact misunderstood the requirements -- who could have foreseen?

Fortunately this was not the complete roadblock it could have been; it just means we need to mail them B's birth certificate (prepaid priority envelope provided) and he may have to hold off working for a day or two next week and then make up the time later. (This, unfortunately, later resulted in the 2018 USPS Fiasco.)

The medical paperwork, which I had been dreading rather more, was not a problem.

Part 3: And When You Think It's All Over

That took until a little past noon. We ate lunch at Gladfelter (which was free for students and family), and then we walked back to Sutton.

Nobody can quite remember what we went there for, but there were certainly plenty of reasons we might have done so. Next item on the agenda was to get B's class schedule set up, so we headed towards Jensen, back across the pedestrian bridge -- whereupon it started to rain. I took several photos on the bridge, but noticed that my phone's battery was rather low, and planned to ask Harena for an external battery as soon as we were settled somewhere. 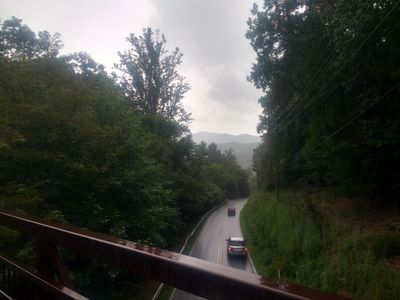 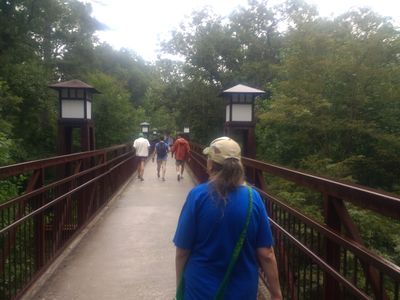 Unfortunately, by the time we arrived at Jensen, my phone seemed to have gone into an endless loop of shutting down due to lack of power, then trying to reboot, but being unable to make it all the way. All my efforts to shut it down yielded no results. It didn't help that the power button had broken off sometime last year, so I had to use a pointy object to try to activate the button, which was never very reliable or quick, so I wasn't sure I was actually pressing it...

Suffice to say that between having lots of places to go and not being sure if I was doing things right or not, it wasn't until many hours later that I became certain that I couldn't revive the phone with tools available to me. In the meantime, we had to go to the official Presidential send-off (where they send families off to go do other things while keeping the students in -- the fledging of the hatchlings) and then off to some other building for unclear reasons... and while we were waiting there, B said he was having trouble with his phone refusing to take a charge, and urgently needed the rest of his charging equipment. We also had realized at some point that he needed a pillow.

So we decided to go off and get supper and then shop for a pillow, pick up the charging equipment, and then meet with B to deliver everything.

It was after 8 by the time we got back to him -- and even with the charging equipment, his phone still wouldn't take a charge. On top of that, we had neglected to bring the older phone he uses as an alarm clock -- so between not having his alarm phone, his regular phone being low and unchargeable, and MS Windows apparently not having an alarm clock feature, he had nothing to ensure that he would wake up on time for the first orientation activities.

Combining this with his dread of having to abruptly shift back to an early wake-up schedule plus general fears of inadequacy, an emotionally wrenching (though not loud or angry) conversation ensued, towards the end of which Zander arrived at the solution of loaning B his phone temporarily.

It was by this time quite late, and we were all emotionally spent. I think it was after 11 when we finally got to bed (with two major technical issues left unresolved), where we normally head that way at 9 sharp.